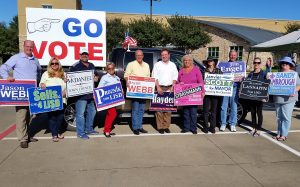 A number of town council and school board seats are up for grabs in southern Denton County on Saturday.

Double Oak residents will determine the fate of a proposed sales tax increase of 1 percent to help cover the costs of repaving roads and public safety. The current combined sales tax is 7.25 percent and, if approved by voters, would be 8.25 percent. Read more here.

Flower Mound voters will weigh in on four contested town council races. Running for re-election is Mayor Tom Hayden, who is being challenged by Janvier Scott (the third mayoral candidate, Jim Berendt, dropped out). Sandy Fambrough is attempting to unseat Bryan Webb in Place 2. Place 4 council member Steve Dixon is not running again and vying for his seat are Don McDaniel and Jim Engel. In addition, there will be a Special Election for the unexpired term in Place 1between Jason Webb and Cathy Strathmann. Flower Mound council members serve two-year terms, each representing the entire town.

The Cross Timbers Gazette held a Flower Mound Town Council Candidate’s Forum on April 14. The forum is being rebroadcast on FMTV through election day and can also be accessed on demand anytime here.

The Argyle ISD Board of Trustees has two seats open; the one currently held by board president Brian Ratcliff and the currently vacant seventh seat previously held by Greg Aune. In the running are: Ratcliff; Brad Lowry; Wes Timmons; Jennifer Pakebusch; and Jeff Williams. The top two vote recipients will become board members. Board members are elected on an at-large basis. Each board member serves a three-year term. Meet the candidates here. Listen to the candidate forum here.

Two out of three Lewisville ISD Board of Trustees races are contested. Candidates for Place 4 are: Katherine Sells of Lewisville; and, Fairooz Adams of Lewisville. Place 5 candidates are: Will Ferson of Flower Mound; Allison Lassahn of Highland Village; and, Jenny Proznik of Frisco.

Polls will be open Saturday, May 7, from 7 a.m. until 7 p.m. Visit the Denton County Elections website for more voting information.