In a special meeting Tuesday night, the Argyle ISD Board of Trustees postponed its decision about new elementary school zoning districts centered around its third elementary school, which will open next year.

The new school is needed to address current and future growth in residential development within the district boundaries, particularly west of I-35W. The district expects to need to build two more elementary schools within the next five years just to keep up with the expected growth, and two of the district’s next three schools (not counting the one under construction in Canyon Falls) are expected to be built west of I-35W. 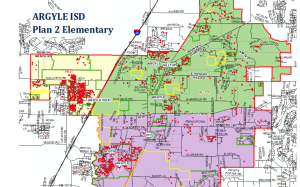 The board was presented with three different school zoning map options, and the third option is expected to be the one that would need the least amount of zoning changes in the near future. In each map, the Ridge subdivision (located west of I-35W, between Harvest and Robson Ranch) would be zoned into a different elementary school. The Ridge is expected to be the one area that will experience the most change in rezoning decisions, because it is currently smaller than Harvest but is going to experience a lot of future growth. There are 23 elementary students who live in The Ridge currently, and more than 80 projected next year. 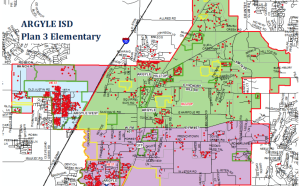 Several residents of The Ridge spoke during the public comment section of the meeting, asking the board to choose Plan 2, which would keep The Ridge in Argyle West Elementary’s zone, which is within walking distance. Plan 1 would put The Ridge students at Hilltop Elementary, which is over 3 miles away, and Plan 3 would zone The Ridge for the Canyon Falls school, which is about 9 miles away. Parents in The Ridge asked the board to not displace their kids from their friends, and they were particularly opposed to Plan 3 because it would take much longer to get to the Canyon Falls school. Some asked the board to consider grandfathering in their kids, an exception to allow their kids to continue attending Argyle West even if their neighborhood gets zoned for another school.

Parents from other parts of the district asked the board to consider a zoning map that would reduce the number of parents and buses that would need to cross the train tracks, because of the traffic issues caused by the trains and buses. Many parents from around the district spoke in favor of using portables as a temporary solution to overcrowding, instead of rezoning.

“Because of the public comments,” the board went back into executive session and did not take any action that night.

Elementary rezoning will be included on the Dec. 13 agenda at the regular meeting of the Board of Trustees as a discussion/action item.