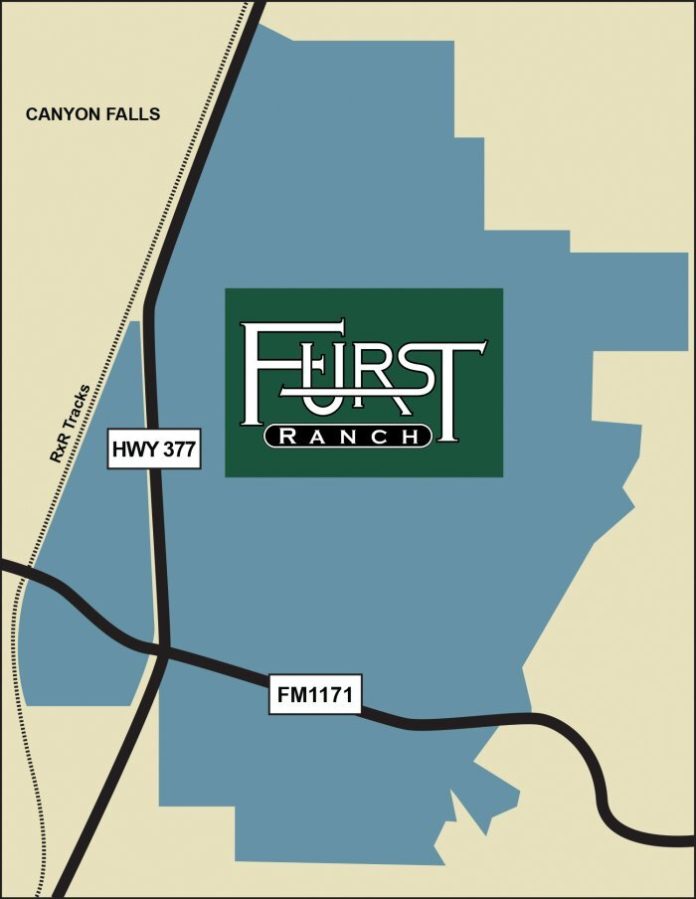 After receiving approval for his rezoning request last month, longtime resident Jack Furst is working with Flower Mound to provide the municipal services required to develop his game-changing Furst Ranch. The Town is considering a development agreement and a Tax Increment Reinvestment Zone (TIRZ) to help fund infrastructure in the area.

On Oct. 3, the Flower Mound Town Council voted 3-2 to approve a rezoning request for over 1,000 acres to pave the way for Furst’s vision to build a mixed-use development on all four corners of FM 1171 and Highway 377 on the west side of town.

The current concept plan calls for 6,000 apartments — 1,000 of which are age-restricted for seniors — as well as 3,000 single-family homes, 6-8 million square feet of commercial space, a resort hotel, a grocery store, corporate headquarters, a hospital, parks and schools.

Furst, 63, envisions the 30 to 40-year project to be a place where residents can live, work, eat, shop and play, all without leaving Furst Ranch.

“I’m glad that the town and its leadership are excited about the vision for the western end of Flower Mound,” Furst said. “I think the council liked that this is going to be a commercial hub that will create a huge tax base for the town and is consistent with the Town’s Master Plan.”

Flower Mound and Furst are considering an agreement (related to a future 97-acre park with ball fields on the south side of the property Furst has offered to donate) and a TIRZ reimbursement agreement, which incentivizes the private investment in public improvements that would only be paid back if Furst Ranch developed as intended. Such private infrastructure investments would not only benefit Furst Ranch, but also all undeveloped areas of western Flower Mound.

Furst and Flower Mound Town Manager James Childers said the Furst team and the Town are working together on the agreements. A consultant was hired by the Town and a feasibility study is being conducted to see if a TIRZ would be a good idea.

Furst said if/when those agreements are approved, the focus will then turn to adding and improving the utilities and infrastructure in the area. The property “will develop naturally from west to east.” The Town and Furst will also begin recruiting commercial tenants and corporate relocations to the development.

Roads, water and sewer will be brought in or upgraded in a timely manner to meet demand and keep up with the development. Furst said he will be patient to make sure all of the infrastructure is done properly before any building begins.

“This land has no debt on it; therefore, there is no reason to rush this important part of the project. Slow is fast,” said Furst.

In the next five years, the Texas Department of Transportation has plans to expand Highway 377 from Argyle to Roanoke with an overpass and access roads at FM 1171. Furst said that the impending road project means “it’s an ideal time for us to handpick commercial tenants to come join Furst Ranch.”

As far as future stores, Furst knows the community would love to have an HEB. “We sat down with them and they like our location.” However, he could not make any promises about landing HEB but said, “We’ll get a good grocer.” Furst added, “As that begins to come together, then we’ll start thinking about what we want to do on the residential side.”

Furst Ranch will be a “legacy project,” for the Furst family and the Town of Flower Mound. “A really special place that will become the western gateway to Flower Mound.”

Thirty percent of the land will be open space with 12 miles of trails. “When you have this much land, it’s a fresh canvas to paint exactly what you want in terms of quality development, open space and amenities,” he said. “We have to do every square inch of it right.”

The development lies entirely inside the fast-growing Argyle ISD and Furst has set aside 50 acres for a new elementary and middle school.

Councilman Jim Engel, who voted in favor of the rezoning request, said Furst Ranch will “bring some sorely needed services to residents who live in western Flower Mound.”

Many of the concerns that residents have with the project revolve around traffic and infrastructure, but Engel believes the expansion of Highway 377 and future expansion of I-35W will alleviate some of the traffic issues, and there will be plenty of time for the town to address other similar issues, even before they arise. “This project is not going to come overnight,” Engel said. “The infrastructure will be there.”

Many residents were opposed to apartments, but Furst said they’re critical for attracting commercial development, and Engel pointed out that they’re necessary when trying to recruit corporate headquarters to relocate to Furst Ranch.

“Jack Furst is going for large corporate relocations, and when you compete for those relocations, you have to have entitlements or current multifamily housing within 3-5 miles,” Engel said. “Unless you have those apartments, you’re not even considered. It would be a good thing for the town to have corporate headquarters in Furst Ranch.”

At buildout, Furst estimated the commercial tax base of the project will be in the $5 billion range. He also estimates that Furst Ranch is expected to be home to more than 20,000 people over the next 40 years.

Read more about Jack Furst and the history of Furst Ranch here.