The applicant who wanted to put two “last-mile” warehouses on FM 407 has withdrawn its plans with the town of Flower Mound and the Matter is now closed, according to a Flower Mound Town Council member. 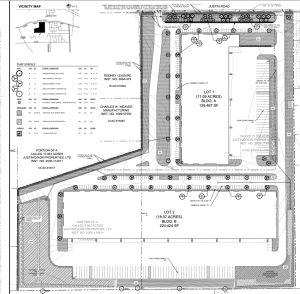 In June, Dalfen Industrial representatives presented their rezoning request and concept plan to the Flower Mound Planning & Zoning Commission for the Cotton Wood Logistics Center on 29 acres at 2901 Justin Road. The concept plan had two Class A warehouses, one about 140,000 square feet, and the other with about 225,000 square feet and 18,000 square feet of office space. The proposed zoning was consistent with the town’s Master Plan designation of commercial/industrial, according to the town.

Dalfen representatives said they thought the proposed development would fit in well with the area, but they drew opposition from nearby residents. The town received 137 neighbors’ correspondence in opposition, none in favor. Many residents spoke against the proposed development during the P&Z public hearing, saying they think FM 407 is too busy already, and the property is too close to residential areas and schools to increase the truck traffic.

One Dalfen executive said it seemed that residents thought the proposal called for a large distribution center — like the proposed warehouse park in Canyon Falls that was denied this spring — but the proposal was for a “last-mile” warehouse, such as a flooring showroom with an on-site warehouse. It would have some tractor-trailer and box truck traffic, but not nearly as much as a distribution center, he said.

Because of residents’ opposition, P&Z commissioners unanimously recommended denial of the request, requiring a supermajority of Town Council (four of five council members) to vote in favor of the request for it to receive approval. The application was then postponed indefinitely, but it remained active in the pipeline. This week, it was withdrawn, ending the issue, according to Place 1 Councilman Adam Schiestel.

“There is no longer a plan to develop warehouses at this location, and there will be no additional public hearings,” Schiestel said in a statement this week. “Thank you to the members of the public who emailed and spoke at P&Z. We hear you loud and clear.”