One high school stadium in southern Denton County will serve as a local practice facility for the revived XFL. 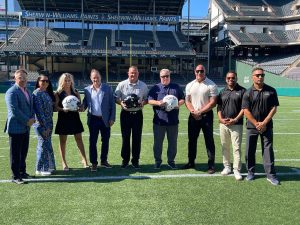 Last week, the XFL — including co-owner Dwayne Johnson — announced that it selected Arlington as its new football operations Hub, according to a league news release. The league signed a three-year agreement that will provide a centralized performance facility and multiple practice venues for preseason and in-week training for the league’s eight teams, three of which are in Texas.

“We are thrilled to be working with Choctaw Stadium and REV Entertainment along with three local high school district stadiums – Northwest ISD Stadium, Southlake Carroll Dragon Stadium and Vernon Newsom Stadium – to create the new XFL Hub,” said Russ Brandon, XFL president. “Convenient access to premium care and athletic training is a top priority for us and this Hub allows us to provide equal, quality care to all of our players.”

Two of the league’s teams, San Antonio and Orlando, will also have access to the NISD Aquatic Center’s weight and training rooms, according to the district.