Travel with Terri to Fairhope, Alabama 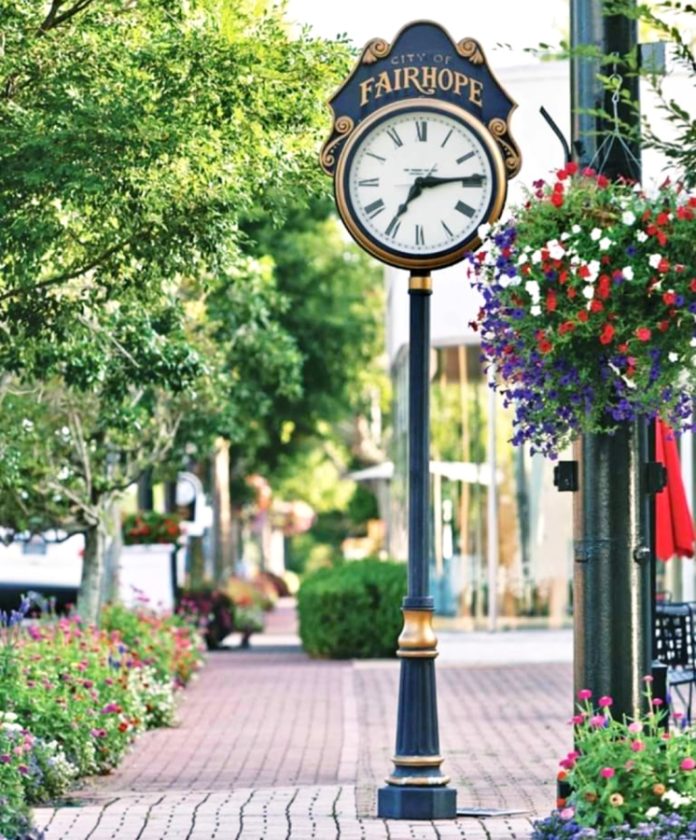 Southern Living Magazine lists Fairhope, Alabama as one of the “South’s Best Small Towns” and I have to agree. It’s a charming coastal town that is located just south of Mobile on the eastern shore of the massive Mobile Bay. It has lots of flower-lined streets, lovely parks, walking trails, art galleries, boutiques, cafes and excellent seafood…that could not be any fresher. No matter if you are fishing, swimming or just walking the Alabama Coastal Birding Trail, you will witness a very impressive panoramic view of Mobile Bay, and it’s especially breathtaking at sunset! 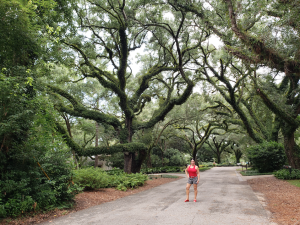 But the one thing that impressed me the most are the many beautiful, enormous trees that are dotted throughout this Deep South community. They have huge Crepe Myrtles, towering Long Leaf Pines, massive Southern Magnolias and my favorite…the majestic Live Oak Trees. These trees make quite an impression with their gigantic trunks, some measuring up to 27 feet around. And, their incredibly long limbs that gracefully dance across the roads, neighborhoods, lawns and even rooftops. Some of these trees have a limb spread of 200 feet. The streets are literally covered with canopies of these century old moss covered trees. They are all very large, lush and green. 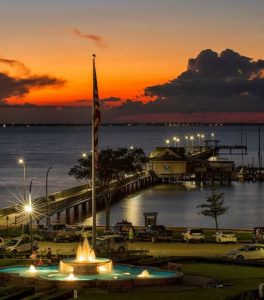 A favorite gathering place for the town people is the Fairhope Municipal Park and Pier. It’s a real jewel with a large fountain and award-winning rose garden. The pier is 1,448 feet long and is designed both for fishing and strolling. It also features benches, covered areas, public restrooms, a marina and a restaurant.

This quaint southern town may be little but it’s mighty! Throughout the year Fairhope has several popular annual festivals. Every spring is the much anticipated Fairhope Arts and Crafts Festival. It is one of their largest events. Over 200 artisans take to the streets of downtown Fairhope to showcase and sell their best works. A wide variety of mediums are on exhibit and for purchase including: fibers and leathers; functional crafts; graphics and drawings; watercolor; mixed media; painting; photography; jewelry; pottery and ceramics; sculpture; wood; and glass.

On New Year’s Eve, once the clock strikes midnight, a fun celebration begins in this Southern Baytown – Mardi Gras season begins!  Here designers, builders, and organizers work tirelessly throughout the year to bring their creativity to life in the form of giant colorful Mardi Gras floats to parade through the downtown streets of Fairhope. These Mardi Gras parades are family-friendly and especially popular due to the beautifully lighted backdrops. 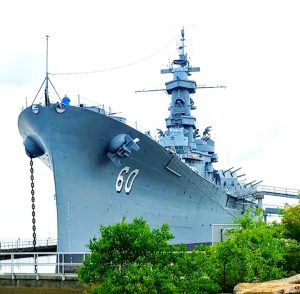 I love the location of Fairhope for many reasons, but especially because there are so many interesting day trips available. For example, in nearby Spanish Fort, Alabama is the USS Alabama Battleship and Memorial Park.

This Battleship had a remarkable career. She began her World War II adventures in the North Atlantic in 1943, then on to the South Pacific where she was known as the “Heroine of the Pacific.” This historic battleship was home to a crew of 2,500 Americans and ended up in Mobile, Alabama as a National Historic Landmark and memorial to millions in 1965 when the USS ALABAMA Battleship Memorial Park opened to the public.

A few years later the park added another jewel. The National Historic Landmark WWII submarine USS DRUM (SS-228) sits in her cradle beside Mobile Bay and the USS Alabama Battleship. The DRUM is the oldest American submarine on public display. It’s fascinating to see and learn about her 72 member crew and their missions during the war. 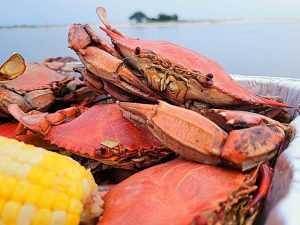 Another educational and fun stop at the park is in the Medal of Honor Aircraft Pavilion, home of an extensive aircraft collection, historic vehicles and war artifacts. Some of the impressive collection includes the Red Ball Express display, honoring those men who ran supplies during WWII and a Red-Tail P-51 airplane, just like the planes flown by the famed Tuskegee Airmen.  One of the newest additions to the collection that we enjoyed is Marine One, a recently restored VH1-N/ Bell 212 helicopter used by Presidents Nixon, Ford, Carter, Reagan and George H. W. Bush.

Dedicated to all veterans and branches of the United States Armed Forces, this patriotic park is one of America’s most unique military attractions!.

So, whether you are looking for a romantic getaway, traveling on a family vacation, or just wanting a fun-filled weekend…Fairhope, Alabama would be an excellent choice and destination!