The AMC movie theater in The Shops at Highland Village is expected to remain open after this year, according to the property manager.

The city of Highland Village held a joint workshop with the City Council and Planning & Zoning Commission on June 30 to receive a presentation about The Shops. Josh Poag, president and CEO of Poag Shopping Centers, said that when his company took over The Shops in January 2020, he expected that this AMC theater was “not going to last.”

“When we took over the property, we knew that the lease with AMC would come up at the end of 2022,” Poag said. “If they want to stay on the property, they’re going to ask for a substantial reduction in rent. If we want the best modern movie theater, they’re not going to be willing to invest and we’d have to put millions of dollars into it.”

Poag said the company began looking into what it could do with the property if AMC closed, and then the COVID-19 pandemic hit in March 2020.

“Movie theaters were devastated, and we were certain AMC was going to close,” Poag said.

Poag Shopping Centers began drawing up plans to replace the theater after AMC’s lease ended at the end of 2022. The company held a community meeting in October 2021 to present a plan to replace the theater with up to 560 luxury apartments, which was met with strong opposition from neighboring residents who don’t want the additional traffic.

But the meme stock frenzy during the pandemic, in which many Robinhood stock traders bought lots of stock in struggling companies like Gamestop and AMC, sent AMC shares soaring and changed the outlook for the theater chain, Poag said, giving the company more cash to make rents. Then in December 2021, the blockbuster Spider-Man: No Way Home “saved the movie industry.”

Poag said that the company recently began negotiating with AMC to renew the lease, and they have come to a handshake agreement to get AMC to stay. Poag said the company is taking “a large financial hit to reduce rent” and keep AMC on the property.

That doesn’t mean that Poag Shopping Centers isn’t seeking to add apartments to The Shops at Highland Village, though. The team at Presidium has “adjusted our plan” to account for the AMC theater staying where it is and build up to 280 luxury apartment units around it.

The four stories of one- and two-bedroom apartments would be located on the east side of the theater — Poag has previously said that the Snuffer’s restaurant would be relocated within The Shops — and the apartments would wrap around a parking garage and two courtyards. 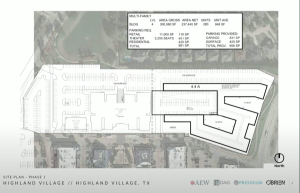 A Presidium representative stressed many times that the apartments would be high-end with lots of amenities, and would attract younger adults with high-paying jobs and some older adults who want to downsize.

Council members expressed concern about how the apartments would impact traffic, though the applicants said that traffic flow will slightly improve — even with the added apartments — once a future construction project is completed to add turn lanes to the intersection of FM 2499 and FM 407.

No action was taken — nor could there have been — during the meeting. The proposal is expected to go before Planning & Zoning and then City Council for approval at an unspecified date in the future.