During Thursday’s Denton Central Appraisal District Board of Director’s meeting, the chief appraiser defended herself against a consultant’s leaked report about a toxic work environment at DCAD, and the county’s top elected official scolded the agency for its lack of transparency and credibility.

This spring, the DCAD board hired consultant Richard Petree from Western Valuation and Consultation to study and report on DCAD’s work environment and help the district grow and improve. That study was supposed to be presented at last month’s board meeting, but was removed from the agenda because four days wasn’t enough time to review it, according to DCAD. The report was later leaked to Dave Lieber, a Dallas Morning News columnist, who wrote that the report said DCAD had a “toxic work environment” and is “one of Texas’ most troubled appraisal districts.” Petree’s report was “hypercritical of Denton County Chief Appraiser Hope McClure’s leadership,” Lieber wrote.

The report was leaked during a busy time of appraisal protests for the understaffed district — Petree, an expert on appraisal districts, said in his report that DCAD had a staff of 88 when it needed about 124 employees to handle the amount of work it has. Petree’s report was added to Thursday’s meeting agenda, as was a “Chief Appraiser’s Report,” a 10-page presentation by McClure that defended herself and the agency against the “bad publicity” that they’ve been getting lately. The district has also recently been criticized for how long it’s taking to mail out this year’s home appraisals, compared to other districts in North Texas. 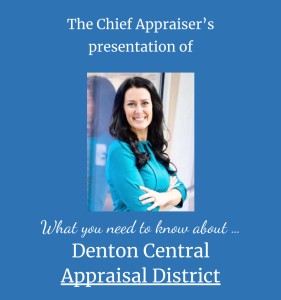 The cover page of McClure’s report is an all-blue background with a large photo of McClure above the text “What you need to know about … Denton Central Appraisal District.” Full-color copies of the report sat in front of the 10 people seated at the table at Thursday’s board meeting. In the presentation, McClure defends her own qualifications for the job, touts her accomplishments, provides positive feedback about herself and DCAD from anonymous staff members, and pushes back on many of Petree’s findings. McClure had DCAD conduct its own anonymous staff survey to rebut Petree’s report, and she wrote that she believes almost everything in Petree’s report to be wrong (a notable exception being his assertion that DCAD needs more employees).

“Denton CAD feels like this reckless report has done more damage than good,” McClure wrote. “Denton CAD will choose to focus on the few accurate details and recommendations in this report.”

McClure’s report can be viewed here.

When the meeting began, some local mayors and residents, as well as Denton County Precinct 1 Commissioner Ryan Williams and Denton County Judge Andy Eads, spoke critically of the district and requested the board postpone its vote on a $2.7 million budget increase. The board later unanimously agreed to table the budget vote until its next meeting in late July.

Eads’ comments were the harshest against DCAD.

“I think this entity has huge transparency problems and huge credibility problems,” Eads said, adding that he’s “very disappointed on the fact that exemptions are not being processed in a timely manner,” referencing at least one resident who waited nine months to hear back about an exemption request.

“I think that is unacceptable … You’re not doing your job.”

Eads went on to say he didn’t feel comfortable supporting DCAD or its proposed increased budget “under the current operation and the current leadership.”

After the board tabled the budget, Petree presented his findings to the board. He briefly summarized his report tried to lessen some of the harshest of criticism that was relayed in Lieber’s column.

“Perhaps ‘toxic’ is too strong a word,” Petree said, adding later that “for the most part, I was pretty impressed with your district,” but there are some things that need fixing, largely relating to a lack of staffing and training. Later in the meeting, McClure acknowledged there was toxicity in the workplace, but it wasn’t because of her.

“We still have a couple toxic employees, but a toxic culture? I just refuse to accept that,” McClure said, adding that she wants to hire new employees to take some of the work off her plate. “I am so busy and so overwhelmed with my job that I am not being there for my employees like I should.”

Regarding the employee satisfaction survey that DCAD conducted and McClure used in her rebuttal, Petree said he has emails and texts from employees saying they were afraid to answer truthfully.

He also told the board that DCAD needs many more employees to keep up with growth. He said many appraisal district positions are “high-stress jobs” and when districts are understaffed, employees often have to cut corners to get stuff done. Deputy Chief Appraiser Don Spencer said the district is about 7,300 exemption requests behind. The increased budget that DCAD is requesting is meant to begin addressing the backlog.

“I can only squeeze so much blood out of a turnip,” McClure said.

An interim communications liaison was recently hired to improve the district’s communication with the public and media.

After asking a few questions to both Petree and McClure, board members acknowledged that there are issues at the district and said they will address them.

“We basically have two people doing the work of three,” said Board Chairman Roy Atwood. “I’m not surprised we have some people with some concerns and some potential attitude issues.”