Denton County’s explosive growth will continue this year, and many years to come.

“It’s just going to be massive growth,” said Michael Talley, the now-former director of economic development for Denton County. “We have to take advantage of it, and we have to take the initiative and prioritize the companies we want to go after.”

Denton County is a new and future home for residential subdivisions, major corporate headquarters and large warehouses and industrial facilities, bringing in thousands of people and jobs.

Texas has been a popular destination for out-of-state residents for decades, and the growth and housing demand has only increased since the beginning of the COVID-19 pandemic.

Job opportunities and the cost-of-living are driving many people from other places to North Texas, and there’s a ton of interest in Denton County.

The overwhelming majority of new Denton County residents are coming from within North Texas — Collin, Dallas and Tarrant counties. New residents from out-of-state are most likely to be coming from southern California, according to county data.

Denton County’s population reached 919,324 in 2020. In 2016, projections showed the county reaching 1 million residents in 2030, but the rate at which people moved here has risen considerably, and the county is now projected to hit the 1 million mark in 2025, if not sooner. In 2014, the county’s 2050 population was expected to be about 1.5 million. Five years later, that projection was increased to 2.3 million.

Talley said he and his economic development team are focused on bringing good companies and good jobs to Denton County, and there are some projects in the pipeline that may be announced this year that would “provide good opportunities for people without them having to move.”

New well-paying employment opportunities vary from industrial warehouse jobs in AllianceTexas in southwestern Denton County to corporate headquarters for Charles Schwab in Westlake or PGA of America in Frisco, as well as new office buildings in Flower Mound’s Lakeside DFW and throughout the county.

Office jobs, though, are undergoing a transition where companies are prioritizing office buildings surrounded by amenities their workers want, such as good restaurants, retail and entertainment within walking distance and having a shorter commute, such as the Lakeside Business District.

Flower Mound’s priority in 2022 is finding businesses for new office space in Lakeside, according to the town’s economic development director, Ray Watson.

“We hope that instead of just being viewed as a bedroom community, companies will look at Flower Mound as an alternative to moving their headquarters here instead of a major city,” Watson said.

Flower Mound’s Economic Development team will continue to work to lure new businesses to town, particularly those that residents have said they want in recent town surveys, such as Whataburger, H-E-B, Trader Joe’s, and high-end retail stores.

Lakeside Village will be another busy spot in Flower Mound this year. Realty Capital is currently installing streets, sidewalks, and landscaping in its new development along Lake Grapevine. Lakeside Village will be home to 55 single-family detached custom homes, four residential towers, three hotels, a wedding chapel, six standalone restaurants (including a new concept by local restaurateur Marty Bryan) and more.

Construction this year will begin on homes, valued $1.3 million and up, and on a 16-story luxury residential tower.

Rebecca Everitt, development partner at Realty Capital, said they are also working to break ground on a 4.5-star hotel and office tower in 2022, and the developer will work on securing restaurants to build on the southern portion of the project. Everitt also teased a “major announcement coming in March.”

2022 will also see new businesses at the River Walk at Central Park. The first two long-awaited eateries, Sfereco and Primo’s MX Kitchen, on Restaurant Row opened late last year, and more are expected to open soon, but that’s not all for the River Walk development.

“There’s still quite a bit of buildable land in that project,” Watson said. “We are continuing to work with the developer to identify uses for that land,” adding that more office building, commercial and medical offices could be coming to the River Walk. 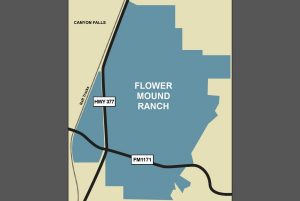 The biggest project that could get approval in Flower Mound in 2022 is Flower Mound Ranch (formerly known as Furst Ranch), a controversial mixed-use development on 2,100 acres at FM 1171 and Hwy 377. Owner Jack Furst’s team has submitted zoning requests for the property, and those requests are currently under review by town staff, Watson said.

“It’s the largest project in the community and probably the most beneficial for the town,” Watson said. “We are working with them to get something brought to Planning & Zoning and Council for approval.”

Watson said there are at least two other major subdivisions along FM 1171 in western Flower Mound that will request council approval in 2022.

That area of Flower Mound, along with much of the undeveloped land in and around Northlake and Argyle, will continue to grow in 2022 with residential developments, but that’s just the beginning, Talley said.

The I-35W corridor from Texas Motor Speedway up to the I-35E interchange remains largely undeveloped, but the Texas Department of Transportation is planning to expand that section of I-35W and add frontage roads, which will change everything, Talley said.

“That’s going to open up all of that land between the speedway and Denton,” Talley said. “A lot of developers are interested in those properties, but they just can’t wait that long to develop.”

Talley said the Denton County Commissioners Court “understands how important infrastructure and transportation is for economic development,” and it has set the county up well to welcome in good new jobs and residents.

“Denton County is in a really great position,” Talley said. “I think we’re in a great spot, a lot of awesome things are happening.”