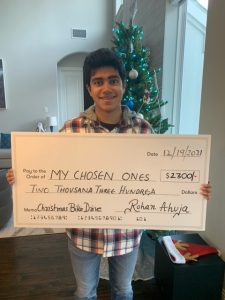 A teenager from Flower Mound collected and donated 32 bikes and a check for $2,300 for kids in foster homes this Christmas.

Over the weekend, Rohan and his family loaded up the new and gently-used bikes and delivered them to the Chosen Ones warehouse, along with a $2,300 donation for repairs, helmets and locks. Rohan plans to collect more bike donations next year.