FMFD Capt. Aaron Moore, Capt. Wade Woody and Firefighter Mark Kubena were deployed Friday as part of a Texas Intrastate Fire Mutual Aid System strike team assisting with the response to the Twin Creek Fire, a 3,600-acre fire in Moore County that was extinguished a couple days ago. Crews remained in Amarillo in anticipation of forecast extreme fire weather, and they were moved Thursday morning to the town of Canadian, according to Brandon Barth, FMFD spokesman.

On Wednesday, the FMFD members and their strike team were deployed to the North 207 Fire in Carson County, which is an estimated 4,000 acres and 0% contained, according to the Texas A&M Forest Service. 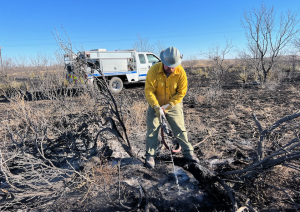 The FMFD crew can be gone up to 14 days total, so they will be back home by Christmas Eve at the latest.

TIFMAS is a state program that utilizes local firefighters from around the state to provide aid when a fire — or other natural disaster, such as a hurricane — is too much for the local authorities. The state reimburses the town for the deployed firefighters’ overtime, as well as overtime required to cover their shifts.