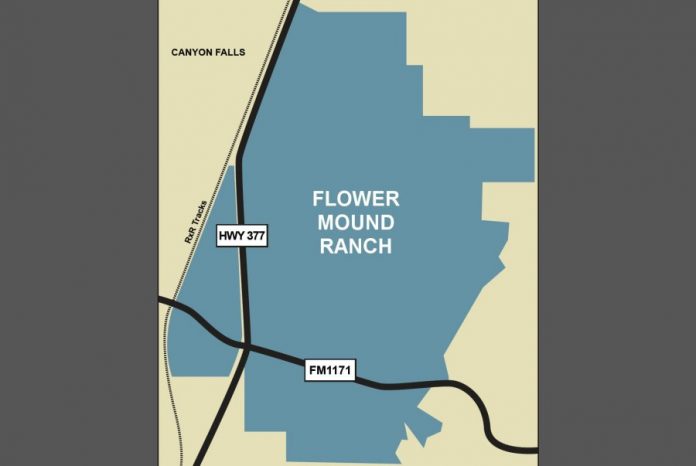 After being put on blast this spring by local officials and residents over a plan to develop his 2,100-acre ranch in west Flower Mound, Jack Furst went back to the drawing board.

Now, he’s back with a zoning request.

On Sept. 3, Furst’s team submitted to the Town of Flower Mound two zoning requests for the property, now called Flower Mound Ranch, consistent with its Rule 11 settlement agreement with the town when the land was annexed in 2006.

The land is currently zoned for agricultural use and interim holding and the zoning requests are to change 1,042 acres to Mixed Use and 544 acres to Single-Family Estate consistent with the settlement agreement.

The zoning applications include a “building gross leasable area summary,” which allows for a maximum of 10,448 apartments. Furst said he has vested rights to build that number of apartments but that does not necessarily mean he will build the maximum amount allowed.

Furst needs the property to be zoned consistent with the settlement agreement so he can attract a developer and businesses, such as a large grocery store, corporate relocations, hotels, hospitals, retail and restaurants.

The zoning requests do not include any Master Plan amendments. Council and Planning & Zoning members said during the April work session on the previously-named Furst Ranch that they want to adhere to the town’s Master Plan.

After that work session, Furst said he would go “back to the drawing board.” He indicated then he was surprised Council did not like the proposal because Furst Ranch was essentially one-third open space–doubling the acreage of Flower Mound’s current parks– one-third residential and one-third mixed use. It was designed with an estimated 2,832 homes, 520 townhomes, 760 condos, 4,000 apartments, 2 million square feet of business parks, 1.6 million square feet of office and nearly 1 million square feet of retail to be built out over 25-40 years, depending on market conditions.

Furst said developer Hines resigned from the Furst Ranch project and the team is now focused on the property’s Rule 11 vested rights. The zoning applications are the next step in that development process.

His attorney, Misty Ventura, said the Furst team expects town staff to finish reviewing the applications this fall and for the requests to go to P&Z and Council in November or December.

“We are excited to work with Flower Mound’s professional team and we expect them to honor the project’s vested rights,” Ventura said. “We want this to be as transparent and uneventful as possible.”

See the zoning requests at www.flowermound-ranch.com.