Travel with Terri to Yuma, Arizona, the sunniest city on Earth! 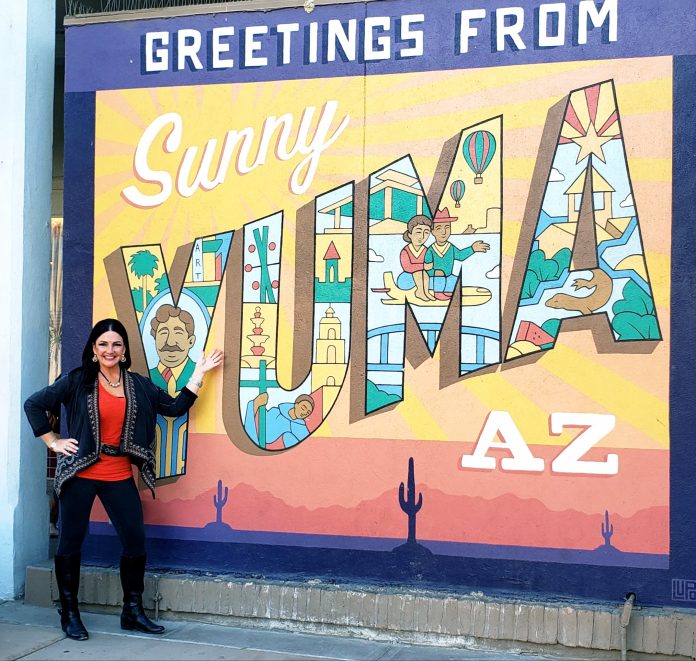 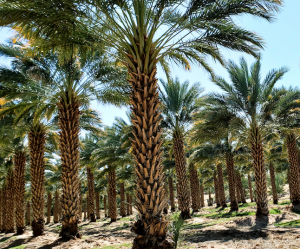 Yuma is a hidden jewel! It’s nestled halfway between Phoenix, Arizona, and San Diego, California and just 12 miles north of the Mexican border. It’s also home to the Marine Corps Air Station that houses thousands of Marines and their families. And from January to March – the Yuma population nearly doubles with sun-seeking snowbirds. Word has gotten out about this beautiful southwestern Arizona city. Yes, it has earned the title for being the “Sunniest City on Earth” because they have sunny skies 91 percent of the year. The average summer temperatures range from 76°F to 106°F, usually cooling down for pleasant nights. The average winter temperatures range from 41°F to 68°F with an average of only three inches of rain annually.

I did not realize that Yuma is a year-round, travel destination. They boast unique cuisines, outdoor adventures, historic landmarks, and events that attract visitors from around the globe. In fact, the historic downtown looks like a movie set. It’s packed with lots of cute local shops and restaurants. And right in town is the Colorado River which offers water sports, trails, and scenic views.

Major Attractions in Yuma include: The Yuma Territorial Prison Museum: Voted as USA Today’s “Best Haunted Destination in the U.S.” This museum is a must-see for history buffs. Original prison cells and stories of the inmates, as well as preserved artifacts, will take you back to 1865…before Arizona was even a state! You can actually go inside the prison cells. And the “Dark Cell” is a place and story that I will never forget!

The Yuma Territorial Prison might just be one of the most interesting historical places we’ve ever toured…in the entire United States. So, when visiting there, be sure and give yourself plenty of time to read about all the prisoners and learn their stories because this is one fascinating “Wild West” landmark from another place and time!

Yuma is one of the very few Arizona cities that can boast having the Colorado River right in its backyard. Paddleboard, kayak, or relax on one of the beaches. Nearby is the Imperial Sand Dunes. This is a great place to grab your ATV or rent a side-by-side and hit the dunes. The beautiful cascading sand hills allow for endless hours of fun venturing this sandy oasis. Bravo TV called it one of the “22 Essential Places to Take a Selfie”, so don’t miss out on a perfect photo-op and the dreamy desert landscape.

Castle Dome Museum, is another place worthy of a stop! Here you can take a tour of this ghost mining town bursting with history. I was in awe of the underground fluorescent and phosphorescent mineral walls. You can easily spend the day moseying through this mine museum and looking at artifacts from over 300 mines. 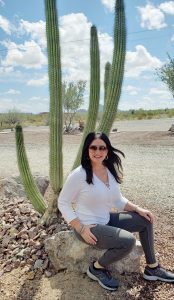 Another favorite was our stop at of one of the many date farms in the Yuma area. We had an educational tour at Martha’s Garden, which is a family owned and operated Medjool Date Farm. It was truly fascinating learning all about Medjool Dates and the very involved scientific process of growing these delicious sweet dates and stunning trees. We finished our tour with a tasty date milkshake!

Also, we discovered more of Yuma’s rich history at the Colorado River State Park and Museum. It was really informative! We learned how the Colorado River was once the lifeline to area military posts through the Yuma Quartermaster Depot. Here you will learn the history and importance of the Colorado River, then and now. It plays such a significance role in this area.

Historic downtown Yuma has its own history, with buildings that have been wedding chapels. There are tales about famous Hollywood stars who have visited Yuma and even gotten married there.

Yuma features numerous outdoor activities from tubing on the Colorado River to off-roading at the Buttercup Sand Dunes. They even host extraordinary events like the Medjool Date Festival, Rio de Cerveza, and Midnight at the Oasis. 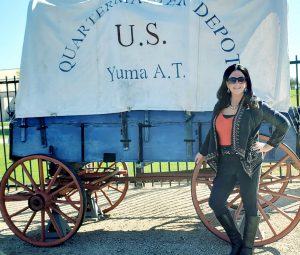 And this may have been the biggest surprise of all about Yuma…they produce 91% of the leafy greens eaten in North America during the winter. Literally, thousands of trucks (no joke) leave this area daily to deliver fresh produce all over America. This makes Yuma the “winter vegetable capital of the world.” Yes…Yuma is in the middle of the desert, but being on the banks of the Colorado River, makes for a wonderful water source, and has created some very rich and fertile soil from thousands of years of flooding. Who knew?

There’s so much to do, see and discover in Yuma. I never knew it, but it’s really a great vacation destination. Yuma, Arizona is more than a desert oasis; it’s absolutely a place to experience!