Local veteran working to help Americans, interpreters get out of Afghanistan 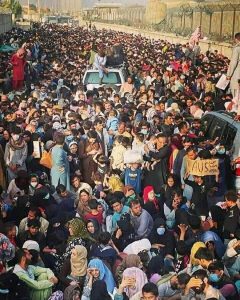 A local U.S. Military veteran is working with a group of other veterans to help bring Americans, interpreters and others to the United States from Afghanistan.

PK Kelley of Flower Mound served three deployments as Army special ops in Afghanistan from 2007-11. Kelley said that when the Taliban took over Afghanistan earlier this month, amid the U.S.’ withdrawal, he and a group of other Military veterans quickly began working to help people get to the U.S. from Afghanistan.

“We’re helping not just American citizens but also people who are supposed to receive special immigrant visas and their families,” Kelley said. “We pooled our assets together to help both people we care about and people we don’t know.”

The effort has been dubbed “Digital Dunkirk,” and it has helped more than 300 people get out of Afghanistan. The veterans and officials are leaning on their experience and acting as emergency dispatchers, calling in favors and sharing information from the U.S., according to The Washington Post. The refugees are vetted and people on the ground in Afghanistan are helping them get through the gates and onto flights, Kelley said.

“Just a bunch of guys and girls came together for the greater good of humanity and care about the innocent and good people of Afghanistan,” Kelley said. “Some of us are only alive because people stepped up to help make their country better and help us, and that says a lot about that person.”

Kelley said some of the people he’s still fighting for is the family of an interpreter he worked with.

“He came to the U.S. and joined the Army, and now we’re having issues getting his family through because it’s so crowded,” said Kelley. “It’s really a mess.”

Kelley said the group is still in its early stages, but some of those involved are working to make it easy for regular folks to make donations and help out.

“My message to other veterans is if you have the means to help with incoming refugees, do it,” Kelley said. “Even though our leaders fail us time and time again, we can’t fail each other. It’s time for our veterans to step up and be leaders.”