The Soapbox: The Cello

There are those moments in life that alter someone’s forever, though they gently ease onto the scene without effort or invitation. These sort of moments can make their introduction as either negative experiences or positive ones and rarely ever announce their arrival or reveal themselves as anything of significance until long after the fact.

I want to share with you, Dear Reader, one such event that has recently surfaced into my awareness when I suddenly knew—I must tell the story.

This is a story of life’s peculiar habit of taking you on the journeys of which you never dreamt until a single moment shows up as opportunity in disguise. I bring you the story of a cello and a boy and how a mother’s trust extends toward Heaven in the seasons of watching children grow into young adults.

One fateful Sunday when my son was in the summer of his 4th grade year, I was scheduled to sing a beautiful worship duet at church that required a cello counter-melody offered by a local student named Cameron. After church was over, I looked to the platform where my son was speaking with him and pawing his cello. This was the moment that began my son’s relationship with this incredible instrument.

After several years of accomplishments on his cello, it was the marching band that called my son to new endeavors. The choice had been made for him by his school. He could only take one elective and with much prayer and apprehension, this Mama’s heart knew it was the right thing to do socially for an only child in a Friday night lights town. We decided to give band a shot. How I prayed the cello would stick regardless…and it did!

As all things were working together for our good, he had an unexpected release from P.E. following a surgery and was able to play in both the school symphony AND the marching band! He was even allowed to play in the high school symphony while in junior high. The irony of this was that Cameron, the person who had introduced him to the cello all those years ago, was also in the high school symphony as an upperclassman. I was so delighted when one day after a performance I revealed to Cameron his part in my son’s love of the instrument. 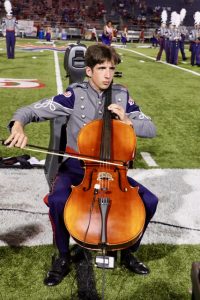 Cameron admitted something I never thought I would hear. He was quitting cello in a few weeks after his graduation. I begged him not to but he owned up to having no passion for it. I couldn’t believe someone with no passion for something could have inspired such passion in someone else.

High school band was the culprit that would challenge my son’s time on the cello with mastery of several marching instruments. As symphony took an undetermined hiatus, he would privately revisit his first musical love, growing into the cello I eventually purchased for him from his teacher MaoMao. The Asian beauty felt her student was worthy of owning the personal instrument that had made her into a world class musician. What a treasure to carry the legacy of the handmade instrument that traveled from China!

Some years later, my son, then a rising senior, and I attended the marching band banquet where the signature reveal of the upcoming show surprised us with the announcement that he would be the featured halftime soloist on his electric cello.

When football season rolled back around, the consensus was that his electric cello wasn’t creating the best sound for this Beethoven/Simon & Garfunkel medley. The band director made an executive decision when he replaced the electric cello with a school-owned traditional cello that could be amplified on the field. We noticed some signature scratches that looked pretty recognizable to the very one that Cameron had played years before.

As a Mom and a faith-filled woman of God, I had to digest that for a moment. Though we had taken a step of faith by departing from symphony and embracing Friday night lights, the cello had returned to him in an unlikely place and time—not just any cello, likely Cameron’s cello that had been the very first one he had ever touched.

Sometimes when we try to hold something so very tight, we miss an opportunity to turn it loose into the remaking of a waiting destiny—one better than we could have ever asked or imagined.

How many times has God used a parenting lesson to teach me to trust Him even more?! All of my son’s years on the football field in the 100 degree heat and all of those private string pieces in the depths of his room had exposed themselves as the building blocks of cultivating trust in a God who has the very best plan for our lives.

I tell this story of the cello to remind someone who has laid something on the altar of prayer not to pick it back up again. Wait patiently even in affliction. See just what God will do when you commit to Him every moment of your life.