C. Stroup: ‘Twas the Night Before Christmas (by the Cat) 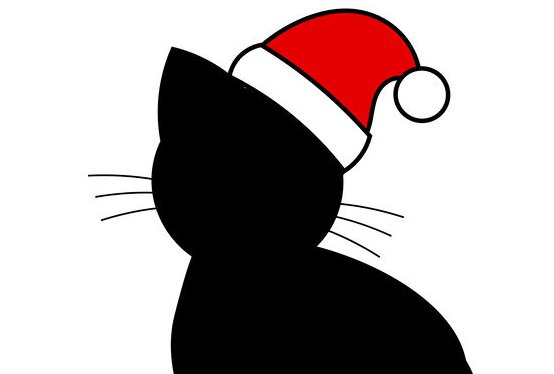 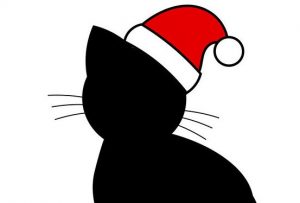 ‘Twas just before Christmas and all through the house not a creature was stirring except for the mouse. The booties were hung by the chimney with care in hopes that St Catalas soon would be there. The kittens were nestled all snug in their beds while visions of catnip danced in their heads.

And mamma in her kerchief (whatever a kerchief is?) and I in my cap had just settled down for a cozy cat nap.  When out on the lawn there arose such a clatter I pounced from my bed to see what was the matter.

Away to the window I pranced … my tail up and hoping to eye ball the intruder who ruined my nap.  And because my head was facing up at the moon, I could see eight stray dogs taking up roof room.

With a little fat cat all dressed in red he descended the chimney with the dogs and his sled. Our sorry old bloodhound barely lifted his head ignoring the stray dogs and the cat clad in red.  They’d gobbled up the cookies and lapped up my milk then left in a hurry as I hissed at these jerks.

I cared not what he left for my humans for gifts, all that I wanted was some non-clumpy litter which I put on my list (maybe this year he’ll do as I wish).

Fat Cat came back with his annoying dogs, seemed he’d forgotten something pretty small. It looked like a whistle for our lazy flea bag but after further sleuthing OMG it was one of those Red Dot lights all cats abhor!  What did I do to deserve such a fate?  Perhaps the reason was the goldfish I ate!

While filling the stockings he turned with a jerk as our mouse came out squeaking causing Fat Cat to lurch.  He needed the help of his shaggy old crew to get up the chimney with the skinny old flue.

He’d left quite a mess but using my wiles I knew how to make our dog take the fall.  And now that things had finally settled down I could resume my cat nap while the mouse nibbled crumbs from the cheddar cheese ball.  The mouse and I lived with some harmony since I never could catch him I just let him be.

I curled up beside the well-lit tree and with a sigh of relief went back to sleep. It hadn’t been a calm silent night but I was puuurrrfectly content knowing Fat Cat was out of sight.  It wasn’t so much that I minded Fat Cat, but for sure his dogs were a pain in the…do I really need to finish that thought?