Layne Allen Murdoch Sr. passed away at the young age of 60 on August 10, 2018, following a short battle with cancer. He had received his diagnosis one day after the death of his mother, long-time Flower Mound resident Doris “Dolly” Smith, on July 2.

Born in Dallas, he was raised in Flower Mound, where he grew up on a farm and graduated from Lewisville High School in 1975. His nickname was “Smoothy.”

He developed a passion for sports and photography, which would culminate in a lifelong endeavor, beginning with a newspaper job at the Dallas Times Herald and ascending to a position with the Dallas Mavericks as staff photographer.

His additional list of clients included the NBA, NFL, George W. Bush, Jr., Getty Images, NBC, CBS, Sports Illustrated and countless more. He finished his career as the NBA team photographer for both the Oklahoma City Thunder and New Orleans Pelicans. His son, Layne Jr., is the manager of the Pelicans digital media video/photography.

In a statement from the New Orleans Pelicans: “We are deeply saddened by the passing of Layne Murdoch Sr., a longtime Pelicans/NBA photographer and beloved member of the Pelicans family. Layne served as the team photographer for the New Orleans Hornets/Pelicans since its arrival in the Crescent City in 2002 and started covering the NBA in 1980. Throughout his tenure, Layne established himself as one of the best photographers in the league. More than anything, we’ll greatly miss his infectious smile and personality that lit up every room he entered.”

In a statement from Oklahoma City Thunder:  “Even if you haven’t heard of him, you’ve almost certainly seen his work. Murdoch was one of the best NBA photographers and followed the Thunder from the very beginning. One of Murdoch’s many strengths was his ability to capture emotion. But more important than basketball, his memory will live on through his family. So, thank you, Layne, for all of the work you put in for fans to enjoy. May you rest in peace.”

To view a collection of his photographs, visit: www.instagram.com/lamphoto/

Always proud of his family, Layne is survived by his four children: Holly Murdoch; Jenny and husband Mark Fallis; Layne Jr. and wife Abby Murdoch; and, Sydney Murdoch; his first grandchild, Octavia, and his brother Bruce Smith of Denver, Colorado.  Preceding him in death are his father, Russell Irwin Murdoch and mother, Doris Miller Smith.

A Celebration of Life service is scheduled for Sunday, September 9 at 3:30 p.m. at Trietsch Memorial United Methodist Church in Flower Mound, with a second line and reception to immediately follow.  All are welcome to attend and celebrate Layne’s life, as he never met a stranger and was a friend to all.  His children are requesting a happy occasion, as this is what he would have wanted.

The family asks that in lieu of flowers you donate to one of the following causes Layne was passionate about and involved with: NBA Cares or the Russell Westbrook “Why Not?” foundation.

A letter from his children–

Our Dad, Layne Allen Murdoch, passed away at the young age of 60 on August 10, 2018. My sisters and I were on the phone with each other when we found out, all in separate cities at the time, but close enough to feel each other’s deep sorrow. We loved him so much, and still do.

Dad had been fighting a battle with cancer when complications arose, and it took him away from us, which leaves a trail of devastation and sadness for those that know and adore him, as we do. Although Dad visited many places, Flower Mound was always his home. He would often talk about the kind-hearted people that live here in Texas. He used to say “It has the best sunsets.”

Originally born in Dallas, Dad moved from the city out to Flower Mound when his Mother (Doris Smith) re-married.  In this new found “country” setting, as it was back in the day, he would grow up a self-proclaimed, “Cowboy-Hippie” who loved rock and roll, playing soccer, and making friends everywhere. On the farm where he grew up, he would ride horses in blue jeans and a straw cowboy hat, or drive the tractor, and tend to the livestock while doing his chores.

Dad was class of ’75 at Lewisville High School, where he was nicknamed “Smoothy,” because of his charming personality. His genuine love for humanity and playful antics earned him countless friendships and admiration from those that crossed his path.

He developed an enthusiasm for sports and photo-journalism which would culminate in a lifelong endeavor, beginning with a newspaper job at the Dallas Times Herald, and ascending to a position with the Dallas Mavericks as their first team photographer in the 80’s. 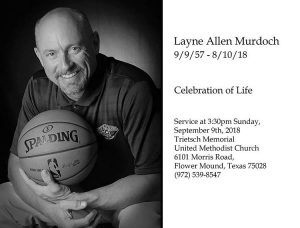 He is credited with photos of celebrities, artists, athletes, and public figures, from all over the world. including Led Zeppelin, Dave Matthews, Brooke Shields, Clint Eastwood, George W. Bush, Jr., Nancy Lieberman, Emmitt Smith, Russell Westbrook, and many more.

Dad would never brag about his high-end clients, but instead would show you the photos he had made and just smile. He loved what he did for a living, and took pride in his work, but most importantly, he built positive relationships with the people with whom he came into contact.

Despite a busy and on-the-go lifestyle, Dad was a driven and committed family man.  He used to set up professional portrait shoots for every Christmas card and take the picture of us kids himself, and then we would all help address envelopes to send them out to everybody.

He coached our basketball teams and drove us all over the state or the country for our sporting events. He always helped us with our homework or helped us write love letters. Whenever we would come home at night he would say, “Let’s have family dinner together… I’m cooking!”.  Dad was always so proud of our family and we recognize the importance of carrying his legacy of laughter and love forward to the next generation.

He was the world’s greatest father and always taught us to work hard, follow our dreams, to love God, family, friends, to make others smile, and of course to laugh at a good fart joke.

Always inspired by music, Dad became a musician by learning to play the drums while listening to vinyl records on a spin table, and deciphering the complex beats in his headphones as a young boy.

He enjoyed going on stage, performing concerts with various rock bands and would play for the rest of his life. Even recently, he could sit in for drummers at local music events, just to show off his skills and the establishment would erupt in excitement.

Also, an avid guitarist, Dad wanted nothing more than to have jam sessions with his friends and family at the house, expressing himself on another level. He also dabbled in playing the ukulele and, more recently, learned the piano. His passion for music took him to concerts around the world to see some of his favorite bands like Led Zeppelin, the Rolling Stones, Pearl Jam, U2, Dave Matthews Band and the Red Hot Chili Peppers.

He found meaning in nature and enjoyed the outdoors. When we were young, Dad would shove all of us kids (plus one dog) in the ‘ol Chevy truck to drive 12-hours to a rustic family cabin in the mountains. We would go backpacking, primitive camping, or snow skiing and look up at the sky full of stars at night. He loved every minute of it. Dad and I went on a Harley Davidson motorcycle tour through the Rocky Mountains for five days once and, while we parked on the side of a gorge looking over the beautiful landscape together at dusk, he put his arm around me and, with tears in his eyes, said: “Son, I have dreamed about doing this for a long time.”