The Copper Canyon Town Council members unanimously denied a proposed 291-home development, but they did give the developer a green light to bring back a lower-density plan.

Toll Brothers had filed an application with the town to develop a gated community called Vickery Park south of FM 407 in the designated Town Center zone, according to Mayor Sue Tejml. The developer and homebuilder requested the town remove the retail/commercial requirement from the 88-acre portion of Town Center and have it consist only of single-family residential use, as well as density be increased to 3.5 units per gross acre. 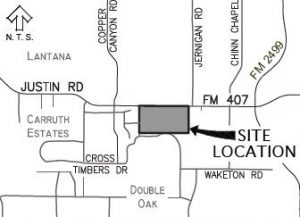 Toll Brothers’ plan would have been a density of five homes per net acre and 3.3 homes per gross acre.

The town council voted unanimously to deny the development proposal, Tejml said. However, the council did approve the request to remove the retail/commercial requirement for the property, so the land can be developed for residential use, but it has a minimum requirement of three homes per net acre.

“We all think Toll Brothers is a first-rate developer, and we’d love to have them in town, but not at the density they proposed,” Tejml said. “It would be out of character for our town.”

0 0 0 0 0
Previous : Burgess to host town hall meeting in Denton
Next : Painted Tree Marketplace to open this weekend in Highland Village