In 2012, the total residential/commercial density the Lakeside Village project would require to make it a thriving and sustainable mixed-use development was established.

Over the past six years– as projects were designed, built and leased– what the market demanded was learned and has determined subsequent iterations as the project goes forward. The zoning was always intended to allow the plan to adjust as market conditions changed, while still maintaining a general sense of predictability on how the project would build-out.

In addition to the changes resulting from the Lakeside DFW development to the north, the adjacent Lakeside Crossing development on FM 2499– was approved on July 17, 2017. 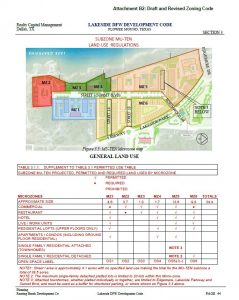 In consideration of the changes since 2012, Lakeside Village is going from three zones to two: MU-C (3), which does not have changes; and, MU-TEN, which combines the previous MU-TEN (1) and MU-TEN (2) zones.

The main reason for combining MU-TEN (1) and MU-TEN (2) is because they were separated by the nine-acre Hines property. It makes much more sense to combine these properties into one comprehensive plan.

MU-TEN (1) was zoned and Master Planned for mixed-use. The area included permitted uses such as commercial, retail, apartments, gyms, antique stores, civic uses and hotels, among others. It was not designated for Campus Commercial in 2012.

Now, the MU-TEN (1) subzone is being broken into six new subzones; which helps give the town more predictability in the outcome, than the original zoning provided.

For the land south of the Lakeside Tower, down to the restaurant point, a maximum of 600 residential units were originally designated. The zoning request seeks to trade 329 apartment units previously approved for Lakeside DFW– but were not built– for 80 additional single-family villas (approximately $1 million) and 249 luxury-tower residences.

The zoning code protects the residents, because it has rules and regulations that have been reviewed by town staff governing what can and can’t be built within each micro-zone of the MU-TEN zone.

The Town’s Code of Ordinances regarding modifications to the Mixed-Use Zoning District Regulations (MUZDR) is found under Section 98-905. Those modifications were vetted by staff, P&Z and council with the original zoning in 2012. Several of the requested modifications were previously granted, but are now needed for the Hines tract. 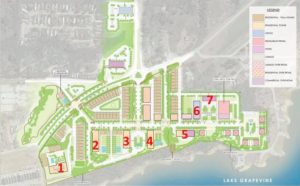 The minimum requirements are 2.5-acres for an amphitheatre and 2.5-acres general open-space.

In addition to the Community Green area located in front of the hotel and cultural arts center on the east side of Sunset Boulevard, there are lake-access “linear” park greenbelt spaces between buildings.

There are nine-miles of equestrian trails and 14-miles of unpaved hike and bike trails for public use within the U.S. Army Corps of Engineers park property along the northern shores of Lake Grapevine. 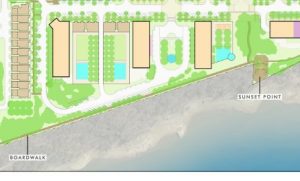 The Boardwalk– as listed for Phase I construction, running from Sunset Point south– will provide walkability; now only available from Sunset Point northward. Public access points include the existing access on Edgemere in MZ 5; the required trail between Sunset Point and Sunset Boulevard in MZ 4; the Sunset Green Amphitheatre in MZ 3; a required connection in MZ 2, with the restaurants and underground parking garages; and, at the linear park south of Street 14, there’s a required trail to access the lakefront.

The Northshore Trail (12.5-miles) is designated as a hiking and mountain-biking trail, with a connection to Murrell Park (12-miles) with its campground and dedicated picnicking spot.

The town’s Traffic Impact Analysis (TIA) for the development was updated in 2017. The result of the study was that the Town’s infrastructure could handle the projected traffic.

The studies performed for these high- density properties on the southern area of Town have met the Town’s SMARTGrowth program for adequate transportation infrastructure.

Necessary improvements to the southernmost roundabout and Fairway Drive have been identified and are addressed in the proposed Development Agreement.

However, state-owned roadways are exempt from that process, because the town does not control these facilities.

Town staff has determined that select service and limited service hotel uses are not a defined use in the Mixed-Use Ordinance; therefore, those two uses are being removed from the zoning code.

Full-service hotels are the only permitted hotel use. These types of hotels charge a higher room rate which ensures the quality of the hotel on both the outside and inside.

In 2012, the Council approved only 175 residential units in MU-TEN (1) to preserve this area to create an entertainment district within Lakeside.

The developer has a variety of street section options to utilize within the Village area. The exact number of on-street parking spaces is unknown (but is approximately 250 spaces), until the construction plans for the streets are submitted and approved.

All street parking will be free. The underground garage parking may require a payment, if a user isn’t validating their parking ticket at one of the Lakeside Village businesses.

For MZ 2: “Structured parking shall be located primarily below street level.” This clause requires underground parking in this micro-zone.

The Master Plan Amendment and rezoning requests for the Lakeside Village development will be heard by Town Council at an extended meeting on Tuesday, April 17.

0 0 0 0 0
Previous : Meet the Candidates: Highland Village Mayor
Next : Safely dispose of your unused prescriptions next week