The Flower Mound Animal Adoption Center took in two dogs with serious injuries within 24 hours last week, and thanks to residents’ donations, they were able to get the treatment they needed and are now recovering.

On the morning of Dec. 8, a little female puppy with a broken leg was dumped at the animal shelter’s front door, said Christine Hastings, Flower Mound’s Animal Services manager. Staff later reviewed surveillance video and saw an unidentified person set the puppy down and “took off running.”

Staff took the puppy, a 2-month-old shepherd/lab mix now named Noel, to Main Street Veterinary Hospital, who set the pup’s leg and gave her a cast, according to a town news release. Due to the severity of the break, Noel could still lose her leg if it doesn’t heal properly, but with weekly re-casting, those involved are hopeful she’ll make a full recovery. 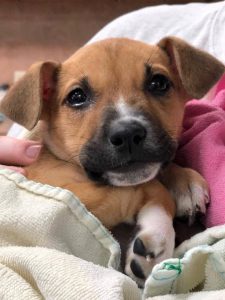 “She’s doing well,” Hastings said. “She’s acting like there’s nothing wrong with her at all.”

Late the same night Noel was left at their door, Animal Services got a call of a stray dog that was hit by a car on FM 1171. The friendly dog, now named Holly, couldn’t walk, Hastings said. She had a fractured pelvis and tailbone and a dislocated hip.

Staff posted her photo on social media to try to find her owner, but none came forward so the shelter took her to Animal Medical Center of Highland Village for surgery and treatment.

“She is sore but doing well,” the department said on its Facebook page in an update about Holly.

It’s rare for animals to end up at the Animal Adoption Center with a serious injury — Hastings guessed it happens only about once a year — and their medical treatment is expensive. Fortunately, both veterinarian hospitals gave Animal Services discounts for their services, but the town’s allotted funding still didn’t cover all of the medical expenses.

That’s where local residents came in.

Animal Services is using donations from the community to their Animal Care Fund to help cover the costs.

“All the donations we receive from the public only goes toward the animals,” Hastings said. “It helps supplement large expenses like this.”

Residents who’d like to donate to the Animal Care Fund can mail a check to the Animal Adoption Center (3950 Justin Road, Flower Mound, TX 75028) payable to Flower Mound Animal Services, or they can stop by in person, where cash, check, or credit is available to make a donation. Animal Services is also currently running its “Paws and Claws” fundraiser.

Residents can follow the story of Holly’s and Noel’s recoveries on Flower Mound Animal Service’s Facebook page, where staff will be providing updates, according to the town. They are both expected to take about six to eight weeks for recovery, during which time they will not be available for adoption and could be taken by rescue groups with foster programs.

If they remain at Flower Mound Animal Adoption Center until after they recover, Holly and Noel — and all the other adoptable homeless animals there — can be adopted for free. Flower Mound, unlike many other animal shelters, hasn’t charged an adoption fee in at least 13 years.

0 0 0 0 0
Previous : Plumber who died under Flower Mound house Thursday identified
Next : Does your cell service suffer in Lakeside? If you have AT&T, it will improve soon