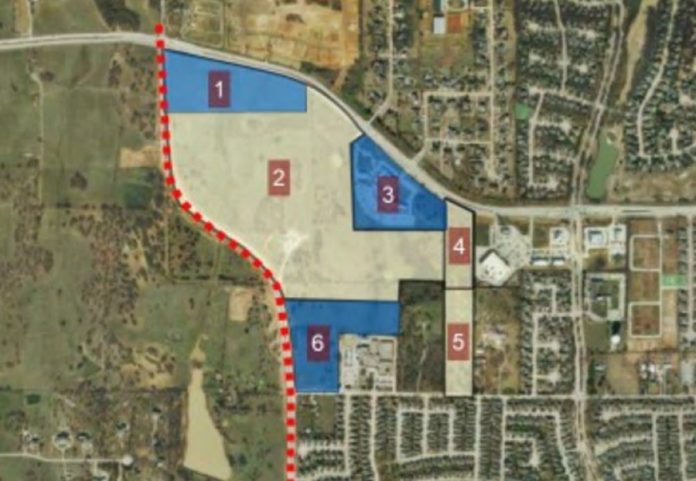 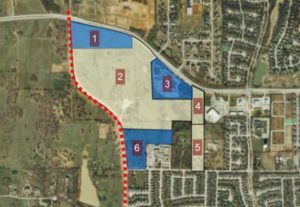 The proposed Founders Classical Academy campus will be located on the southeastern corner of FM 1171 and Flower Mound Road. The current school location in Parker Square has no outdoor use and the building is at capacity.

However, at issue was the extension of the town’s wastewater line into the 5,690-acres of the Cross Timbers Conservation Development District (CTCDD). As a Master Plan amendment, a super-majority vote (four council members) is required.

The genesis for moving the entire eastern CTCDD boundary line was the state charter-based school’s original request, on the council’s Aug. 7 agenda, to expand the town’s Cross Timbers Wastewater Service District map to include the 19-acres school property– which is currently within the protected district. That request failed the required super-majority approval with a 3-1 vote; council member Jason Webb was absent. Mayor Pro Tem Don McDaniel voted against extending sewer into the CTCDD. As a result, council requested town staff to address changing the boundary map.

The result for council consideration on Sept. 5, was: “Land Use Plan, Section 2.0, Area Plans, and Section 9.0, Wastewater Plan, of the Master Plan to change the current land use designation from Cross Timbers Conservation Development District to Estate Residential and Institutional uses, and to expand the boundary of the Long Prairie Wastewater Service District Map to include the subject property.”

In his presentation, Doug Powell, executive director of Development Services, explained that the six parcels involved in the wastewater and land-use change doesn’t change the Agricultural zoning.

The council’s first attempt at a Master Plan amendment was to change the entire eastern boundary line– from the current jagged CTCDD demarcation boundary– to the straight line of Flower Mound Road. It would remove 167-acres from the protected/no-sewer area, thus allowing sewer hook-up for the new Founders campus. It also, however, changed the current two-acres with septic residential requirement to the 1-acre Estate Residential density.

“The staff suggested removing this property [from the CTCDD] three-years ago,” said Deputy Mayor Pro Tem Kevin Bryant. He added that having a defined boundary would strengthen the remainder of the CTCDD.

“It’s a complicated issue,” said Jason Webb, adding that he would’ve voted against the original request had he been present.

“I think there’s a benefit in clarity,” he said. “To set a line and that there’s a capacity issue, making it more difficult for properties going forward to get sewer. I think the original line was arbitrary. We don’t like changing things piecemeal with exceptions.”

Council member Claudio Forest said that by taking emotions out of losing 167-acres from the CTCDD by setting a defining line will,” make us [the town] better-off as a community. If you make exceptions, then more will follow.”

McDaniel read a statement from absent Mayor Tom Hayden, who was not feeling well, that he’d personally contacted the representatives of the future Catholic Church to be built on the southwestern side of the Flower Mound Road and FM 1171 intersection. They indicated that, although they’d prefer sewer access, in light of the current discussion, their intention is not to request that access.

Bryan Webb again raised his Aug. 7 question: “What happens when you flush the toilet?”

As someone who lives with a sceptic system, he said that on mornings when he goes out the get his newspaper and the “wrong” sprinkler system is on, he hesitates to make that walk.

“How are you going to deal with 17,000-gallons of waste each day from that school,” he asked. “The best way is to dispose of that waste through our waste-treatment plant.”

McDaniel stated that– although he’s voiced his concern at the location of the CTCDD boundary line for years and when he served on P&Z– he’s a strong proponent for the district itself.

“We’ve pulled sections of this area out of the Cross Timbers in little pieces at-a-time … it continually creates exemptions to the conservation district,” he said. “I truly believe by removing these tracts of exceptions, [moving the line] will make the CTCDD stronger.”

He also addressed the often-asked question: “Why change the boundary line now?”

“Well, the roadway wasn’t there before,” he said. “Now intensity-of-use with a four-lane arterial adjoining a six-lane state road makes a strong demarcation.”

McDaniel also pointed out that using the sewer capacity that the town has already paid for is the fiscally conservative thing to do.

“If the capacity is used, it makes it astronomically expensive to extend the sewer farther to the west,” he said.

When votes were cast, the written amendment failed to pass, with both Jason and Bryan Webb voting nay for the land use change.

Bryan Webb then made a verbal amendment accepting the sewer change at the developer’s expense and leaving the land-use as the current CTCDD. That version failed with McDaniel, Jason Webb and Forest voting nay.

After a back-and-forth discussion on exact wording, a Master Plan amendment removing parcel #1 (the original 19-acres for a new Founders Classical Academy campus) and parcel #3 (the already-built and sewered Rockpointe Church’s 17-acres) from the CTCDD passed, 4-1; McDaniel was the nay vote.

In other words, after being put on-hold for a month, the school can again request sewer access to the town wastewater line to the north– under FM 1171– because the 19-acres are no longer in the restricted CTCDD.

It also means that the remaining 131-acres of the current CTCDD east of Flower Mound Road will have future exceptions requested, so archive this amendment history for future use.

To quote an old joke, The CTCDD eastern boundary line will be “slowly pecked to death by ducks.”