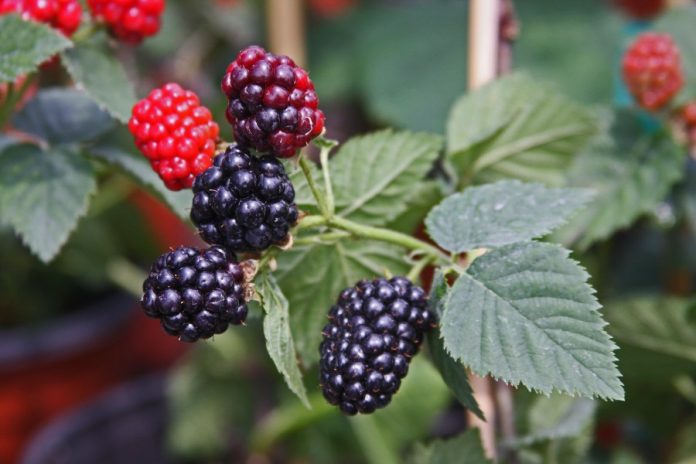 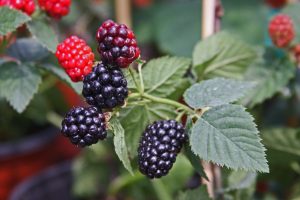 Here’s a riddle: When are Comanches or Navajos or Cherokees not Native Americans?  Give up?  When they are thornless blackberry shrubs drooping with plump fruits. In the “Complete Guide to Texas Gardening 2nd Edition” Neil Sperry declared, “Blackberries are one of the best-adapted and most productive of all fruit crops grown in Texas.” (p. 287)

The common blackberry (Rubus fruticosus) belongs to the same prickly plant family as roses, but a few years ago breeders at the University of Arkansas developed several immensely popular thornless varieties they named in honor of American Indian tribes. Wild blackberries, Old Timers called brambles, grow along my fence lines, and oh my, talk about thorns!

Domesticated berry plants arrive at the nurseries in one-gallon pots or a similar packaging. Plant them any time of the year, but bare root cuttings traditionally go in the ground in mid-winter. Don’t be shy about allowing one-yard of space between plants or root cuttings. Oh, and take it from the voice of experience here, half-a-dozen plants will produce a LOT of fruit for eating, baking, freezing, preserving and sharing.

There’s more good news. Blackberries are self-fertile, which means they don’t need outside help moving pollen around; they are highly pest and disease resistant; they make great hedges (think about using trellises); the flowers look like charming little white, pink, or red wild roses; and, when fresh, the ripe fruits are a reasonable source of soluble iron and vitamin C.

Blackberries are classified as erect, semi-erect, or trailing biennial plants. The stems, called canes, have a two-year life span. Every year, vigorous green new “primocanes” emerge as true stems or suckers from the existing underground root crown. The key word here is vigorous, because in one season, primocanes may reach six- to seven-feet in length. When this happens, the person in charge of the berry patch “heads back” the canes to four- or five-feet long. This strengthens the canes and directs the plant energy to plenty of lateral branching, which means more fruits next season.

During their second year of life, primocanes change their name to “floricanes,” because that’s the year they put on flowers to produce delicious fruits. Lateral floricane branches can get gangly, too; so the person in charge trims them to about 16-inches long, each.

Here’s the pruning rule of thumb. After harvest, which is in late springtime or early summer, cut back to the ground ONLY the spent, dark-skinned floricanes, which will die anyway. This pruning prevents a crowded-mass of brambles, which block sunlight and the pruning improves air circulation, which discourages diseases and pests.

Blackberries grow and develop most in the spring. They like slow deep watering, but there is such a thing as too much of a good thing. Water when they look thirsty and slow down evaporation by applying plenty of mulch. If you insist on commercial fertilizer, use 3-1-2 food, but remember blackberries are pretty darned hardy. Remember the local worms by digging lots of compost into the berry patch and add the stuff on top, too. The feeder-roots hang out close to the surface to slurp in the tasty by-products of decomposition.