Hayden: Your Tax Dollars at Work

Each year, Flower Mound’s new fiscal year starts October 1, which means August and September are busy times in municipal government, as property tax rolls are finalized and budgets are set for the following year.

This year, there seemed to be questions regarding the Town’s budget, so I thought I would use this as an opportunity to review where your tax dollars go in our Town.

Let’s begin with property taxes. Our tax appraisals are determined by a governing body in Denton County that bases the value upon what they deem to be the market value of one’s property. The school board, municipalities, and county governments have zero influence into the valuations of property. Once the valuations are established and taxes are paid, approximately 70 percent of your property taxes go the local school board, 20 percent to the municipal government, and 10 percent to the County government.

A local city or town, while having a few different revenue sources, primarily relies on property taxes and sales tax collections. Flower Mound has made great strides in the last several years, increasing our sales revenue by more than 30 percent since 2012. However, as you can see from the charts below, even with the substantial progress in sales tax collections, we woefully trail our neighbors and have an over-reliance on property taxes to fund our local government. 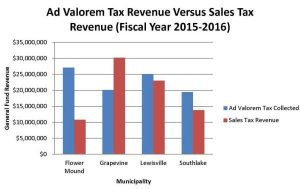 For the 20 percent of your property taxes the Town controls, for us to have a meaningful reduction in the tax rate, we must have a more balanced stream of revenues like our neighbors or be willing to except a reduction in services, which isn’t in the long term interest of the town.

In spite of having a disadvantage in sales tax revenue, Flower Mound continues to have one of the lowest tax rates in North Texas while offering parks, fire and police protection, and road maintenance that is second to none. This is achieved by a staff that takes pride in their work and the positive leadership of our Town Manager Jimmy Stathatos and Deputy Town Manager/Chief Financial Officer Debra Wallace. 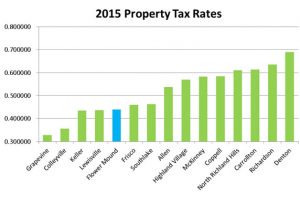 So where do you tax dollars go? As with most organizations, approximately two-thirds of the Town’s budget goes to pay employees of the Town, from our Public Works department to firefighters. As our property values go up, even as the tax rate stays the same, the bulk of the increase has been used to improve our employees’ compensation. For many years, Flower Mound was unable to offer competitive compensation which resulted in an inability to retain qualified staff or effectively recruit. At one point, many years ago, our Police Department had a 44 percent turnover. Having quality services for our residents begins with our ability to attract and retain quality personnel. Most of our Council Members and myself have placed an emphasis on competitive compensation for the employees of Flower Mound. 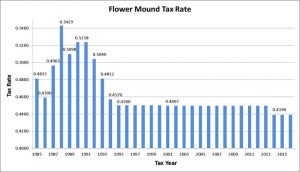 A positive trend that has occurred over the last several years is a reduction in the percentage of tax dollars used to service the Town’s debt. In 2012, 12 cents of your tax bill was used to service the Town’s debt (interest and principal). Today, approximately 10 cents of what you pay in taxes goes toward servicing our debt. While 2 cents may not seem like a substantial difference, it is a 17 percent reduction and equates to several million dollars a year. This was achieved by retiring or paying off more of the Town’s debt than new debt being issued, and refinancing a large part of the Town’s outstanding debt at lower interest rates.

In this year’s budget, there are several items the Town Council and Staff have prioritized. Approximately 10 million was budgeted for new street projects throughout Flower Mound, with the largest expenditure being Waketon Road improvements. The dangerous curve behind WinKids will be softened and straightened out. Additionally $3.5 million was budgeted for street reconstruction projects including Yucca and McKamy Creek. Almost $4 million dollars was allocated for park improvements with the bulk of the expenditures going to Heritage Park, located in southeastern part of Flower Mound. Seven million was allocated for wastewater projects that will improve and upgrade areas where there have been difficulties. It’s an ongoing process but an important process to maintain the Town’s underground infrastructure.

Additionally, the Town is funding Fire Station 6 this year in the in the new Canyon Falls subdivision located in western Flower Mound. With the additional population increases, it is necessary to have a fire station west of the railroad tracks to maintain our ISO rating, which directly affects the cost of your home insurance. Further, we are adding additional police positions in our town. The last time new police positions were added was 2008.

Lastly, Councilman Jason Webb identified our Seniors In Motion Program needs new, safe transportation. As a side note, the senior programming has grown from 500 members to approximately 2,000 members since the opening of the new Senior Center. Jason’s request was met with Council approval for new, safe transportation for our seniors’ activities. Additionally, the Town is moving forward with the first stages of expanding the Town’s Tree Farm. The idea is that we not only use homegrown trees for public areas, but each Arbor Day, we’d like to give young trees to our residents to replant and help expand the tree canopy within Flower Mound. The expanded tree farm will be located at Green Acres Park.

If you have questions about the Town’s budget please feel free to give me a call at 214-384-1105. I would be glad to speak with you about it.