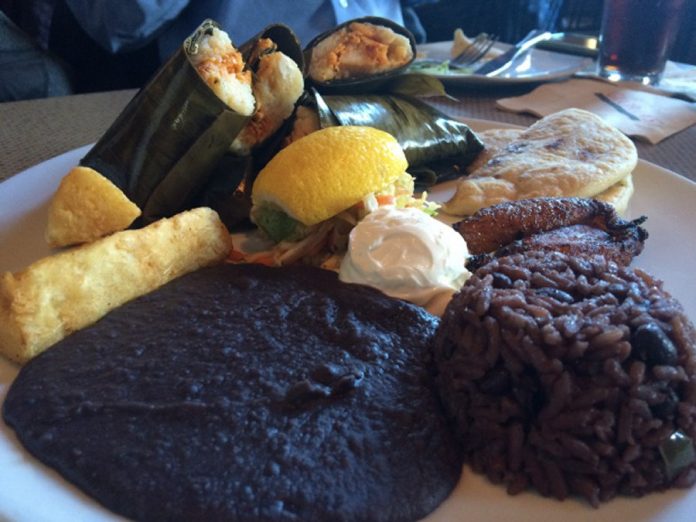 There is certainly no lack of excitement and anticipation for the grand opening of Gloria’s Latin Cuisine here in Flower Mound at the end of February. In fact, we are so excited for the opening that we actually headed to the Frisco location this week to chat with the owners’ daughter, Nancy Flores, and their Operations Manager, Carlos Riveroll. Well, and to enjoy some of their incredible food, of course.

The story of Gloria’s is a truly incredible one – the epitome of the “American Dream.” Owners Gloria and Jose Fuentes originally came to the States in 1978 after fleeing from their home country of El Salvador during its decades-long civil war. After originally settling in Houston, they moved up to Dallas to be near Gloria’s sister, who owned a Salvadorian restaurant in Oak Cliff. A year later, they took over operations of the restaurant, and in 1986 officially opened Gloria’s Latin Cuisine.

And now 30 years later, they’re working towards opening their 16th Gloria’s restaurant. That’s quite the inspiring journey, don’t you think?

What I love most about Gloria’s is that it’s different from your typical Tex-Mex restaurant. Gloria and Jose have artfully crafted a menu that features flavors and cuisines from their native country of El Salvador, along with Mexico and other Latin American countries.

After undergoing extreme stress over narrowing down what to order, the Fuentes’ daughter, Nancy, offered to order our meal for us so that we’d get the perfect dining experience. And we were grateful to her for helping us out, because there were so many delicious-sounding options!

To start, Nancy brought us their Gloria’s Super Special which is a sort of “Taste of El Salvador” plate. It features several well-known Salvadorian dishes including Pupusas, Salvadorian tamales (which are steamed in banana leaves and are stuffed with chicken, potatoes and bell pepper), Fried Plantains, Fried Yucca (it tasted almost like a French Fry), and their Matrimonial Rice made with rice and black beans.

We also got to try some of their premium drinks including their Orchata and Tamarindo (a traditional Salvadorian drink made from a sweet plant that kind of looks like a gigantic brown edamame). I LOVED the Tamarindo – it tasted like a tart fruit juice. And I actually tried the raw plant itself. It was kind of like a natural caramel!

And luckily we took some friends with us to lunch this week, so they were able to sample one of Gloria’s famous margaritas for us, which they said was definitely a winner, but also not for the faint of heart!

And for our main courses, we tried their Salmon Chimichurri Salad; the Nancy’s Ribeye served with green beans and yucca dressed in chimichurri; and the Lemon Garlic Red Fish served with yucca.

Flower Mound residents are sure to be happy, happy, happy when the Gloria’s in the Highland Plaza opens. The plans include a 350-diner covered patio that will be encloseable with heaters for the cold months and will have misters and fans for the hot summer months.

Their goal is to make the Flower Mound location a great gathering place for family and friends. Which is what I truly love about Gloria’s. Even though there are several locations, it’s still a family-owned company where they treat their staff and customers like family. From the moment you sit down, you feel like you’ve been invited into the Fuentes’ home to enjoy some of their family’s favorite dishes.

So, we hope you all run out to support them here in Flower Mound once they open in a little over a month. And if you just can’t wait until then to try some of their fabulous food, there are lots of other locations for you to choose from as well!

We wish the Fuentes family all the best here in Flower Mound, and look forward to seeing their success here!

*Gloria’s in Flower Mound will be located at the Flower Mound Highland Plaza shopping center on the southeast corner of FM 407 and Chinn Chapel.