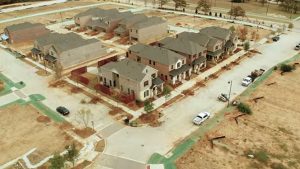 Although the most anticipated agenda item listed for the Dec. 7 Flower Mound Town Council meeting was the results of an independent investigation of any wrongdoing by council members, an updated presentation of the River Walk at Central Park development was also a highlight.

At that time, the existing structures were: the hospital; medical office buildings #101 and #103; the Park Central Apartments on Morriss Rd., Market Street on FM 2499; and, retail stores on FM 1171.

The election approving PID (Public Improvement District) financing was on Nov. 5, 2013, and it took until January 2014 to receive town approval for infrastructure construction on the east side of the canal, as well as the change for the chapel to be built on a manmade island to be created in the canal. It will overlook the 14-foot waterfall, built from Colorado River rocks, at the southern end of the canal.

The chapel location was originally planned to be on the west side of the canal at its southern end.

The change to the original Developer’s Agreement was among the most significant of many and, by itself, resulted in a four-to-five month time delay. Other changes included: relocating the restaurant section; changing the amphitheater audience area from an open grassy area to including 500 actual seats; changing the open plaza area to that of a retail-lined promenade with artisan kiosks within the median; and, the addition of a Courtyard by Marriott Hotel.

“The amended development plan was approved on May 15 and the amenities were given final approval Dec. 1,” said Dollak. “That included all the sidewalks, landscaping, arbors, and irrigation [construction].”

On Jan. 15, 2015, there was a zoning change to move the restaurant location to face the water— a restaurant row now called Waterfront Alley. It will have three buildings with eight to ten restaurants in 24,500-square-feet, plus 7,500-square-feet of patio space and outdoor dining along the canal’s edge. There will be a multi-level, podium parking facility.

“We’re still in negotiations for the northern-most space, but we’ve got some great ones already set,” said Dollak.

The most southern space will be a sports-themed restaurant, The Green Jacket American Grill, featuring upscale American lunch specials Monday to Friday and brunch on Sundays. Sports-lovers will have 70-HD TVs and a 50-foot LED wall on which to watch games.

Next door, will be Ron’s Tavern On The River Walk; a unique selection of craft beers and specialty cocktails, with more than 100 liqueurs.

Next, will be Primo’s Tex-Mex Grill, an upscale, sit-down restaurant.

“In April, the Courtyard by Marriott Hotel was added and they’ve already broken ground [constructing the infrastructure],” said Dollak. “It will have 147 guest suites and a 6,000-square-feet conference space and they plan to open in the first quarter of 2017.”

Construction on the infrastructure of the west side canal was approved on May 11, including: the two bridges; all the River Walk Dr. amenities; and the linear park along Central Pak Drive and expanding Central Park to meet west Windsor at FM 2499.

The enhancement areas—the entertainment/gathering/plaza district, amphitheater, the chapel and River Walk linear park amenities, such as the sculpture, specialty lighting and landscaping—have all been approved.

On Oct. 5, the Reception Hall needed a SUP (Special Use Permit) to be used separately from the chapel. Construction on the Chapel and Reception Hall should start on those buildings in February.

“We’re not going to turn the water on until the two bridges and the water-walls are built,” said Dollak. “Weather’s played a big role this year in getting things done.”

The record 63-inches of rain have required pumps to be used to drain the riverbed.

“We’re still waiting for the electric permit to turn on the hydraulic pumps for the water to flow, but the weather has caused a delay,” said Dollak. “The water-walls along the river, across from the amphitheater, have had their footings poured, and the rock walls are going up, but they cannot be built if there’s existing water.”

In addition, by re-orienting the restaurants to face the water, the open-area plaza has been changed to an east-west promenade with 24,000-plus-square feet of retail buildings and artisan kiosks in the median. The change added another four-to-five months to the timeline.

The residential sections of the development are also underway.

The northern-most 84 Lakeshore Terrace Townhomes are being included with the west infrastructure construction.

On the west side of the canal, between the Amphitheater and the Waterfront Alley restaurant row, are the 52 Parkmont Place Townhomes being built by Our Country Homes.

On the east side of the canal, are the northern-most 97 custom single-family patio homes, The Villas at River Walk, which are under construction and have only been waiting for Oncor to move forward with the street lights.

The 72 luxury Riverside Point Townhomes, which are alley-fed, are directly on the east bank sidewalk, with the Park Central Apartments behind them to the east and the River Walk Village Apartments adjacent to the south.

Finally, the 55 luxury, three-story townhomes in The Pinnacle at River Walk are below the Chapel and are the most southern residential buildings on the east side of the canal.

When Dollak finished his presentation, Mayor Tom Hayden asked: “What happens if timelines aren’t being met?”

Town Manager Jimmy Stathatos answered that each time an amenity doesn’t meet a deadline, about $3.5 million of PID incentive funds are held back.

Development Services Executive Director Doug Powell answered that Developer Agreements are not tied to meeting timelines and that no penalties are assessed.

“The agreements are based on completion of an amenity and when one is completed, the funds are released,” he said.

“We’ve lost over 140 working days this year,” said Moayedi, stepping to the podium. “The [water-wall] abutments can’t be built, if the river has water in it and neither can the two bridges.”

Dollak added that each significant rainfall means a two-week delay.

“Some of the buildings had to wait for Oncor and Atmos,” he said. “We were held-up for traffic lights and before the hotel can go vertical, it needs the fire marshal’s approval.”

Bryant said he understood all the weather-related issues, but people are asking when they can see some progress.

“Nobody gets hurt more here than we are,” said Moayedi. “I’m making the payments on the PID bonds. There’s $200 million in interest fees per year being paid on the PID; plus we’ve put up another $30 million to go vertical on some of the buildings. None of this is costing the town anything.”

He said people will start to see the progress soon, if the weather cooperates. The water-walls should take only 30-days to finish and in 60-to-90-days the canal water will be flowing. The restaurants should begin in February and once the slab is set, the chapel should be starting in March or April.

“We’re all anxious and want to see water flowing,” said council member Bryan Webb. “I know it’s been wet and that there’ve been a number of changes; most significant was to re-look at these restaurants. We’ve got to take advantage of that amenity. Yeah, it would’ve been nice to have that idea on day one; but, it’s better to recognize a good idea and make a change and implement it and go forth, rather than let it go by the wayside.”

Bryant said he just wants to let the developer know that people are anxious to see the River Walk make faster progress.