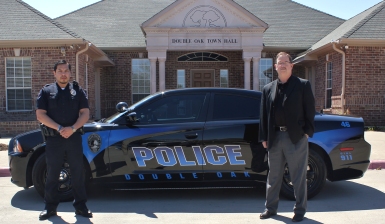 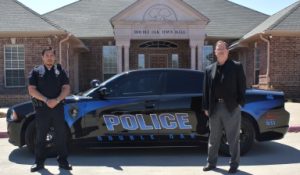 Forgery / Fraud – 400 blk. Simmons, Double Oak – Complainant was notified that an unknown party had fraudulently filed an income tax return in his name.

Suspicious Vehicle – 300 blk. Meadowknoll, Double Oak – A resident informed the reporting officer that a maroon Chevy Lumina had been entering and backing out of multiple residence driveways.  Officer stopped the vehicle and determined that the driver was wanted out of multiple police agencies and had a suspended identification card.  Subject was taken into custody and transported to jail.

Disturbance – 7000 blk. Justin Rd., Denton Cnty. – Reports of a “brawl” at a local business.  Later reports indicated that the disturbance moved north to Stanton St. in Lantana.  Officers were unable to locate the offenders.

Traffic Stop/Arrest – 300 blk. Waketon Rd., Double Oak – During the course of a traffic stop it was determined that the driver was wanted by Denton County for a probation violation.  Subject was taken into custody and transported to jail.

Suspicious Activity – 100 blk. N. Forest Ln., Double Oak – A resident witnessed an unknown woman digging through a neighbor’s garbage.  Upon further investigation it was determined that the person was employed by a company that conducts estate sales and was supposed to be on property.

Disturbance – 8700 blk. Cherry Lee Ln., Lantana – Officer was cover unit during the investigation of a disturbance by Sheriff’s deputies.

Disturbance – McMakin / Shiloh Rd., Denton County – Rolling disturbance reported involving two motorists.  Upon further investigation it was determined that one of the motorists was attempting to obtain emergency services for an ill pet.

Suspicious Activity – 8100 blk. Justin Rd., Double Oak – Officer observed spotlight being utilized on private property at 10:16 p.m.  Upon further investigation it was determined that four cars worth of young persons were playing volleyball by spotlight behind a church.  Subjects departed without incident.

Traffic Complaint – 300 blk. Valley View, Double Oak – A report of an unknown person “screeching tires” and slamming on brakes to create a disturbance.  Officer was unable to locate the suspect.

Shot Fired – 100 blk. Lake Trail, Double Oak – Report of a possible gun shot.  Officer was unable to locate the source of the noise.

Assist Agency – 1700 blk. Meadows Ave., Lantana – Officer responded to a report of a loud noise outside a resident’s house.  Officer was unable to locate the source of the noise.

Suspicious Activity – Oak Trail and Simmons Rd., Double Oak – An adult female runner reported having been followed by a white sports utility vehicle.  Officer was unable to locate the motorist.

Suspicious Person – 3900 blk. Chapel Ct., Double Oak – At 10:53 p.m. an unknown person was observed inside a vacant house using a flashlight and removing items.  Further investigation revealed the subject had permission from the family to be inside the residence.

Suspicious Activity – 300 blk. Simmons, Double Oak – At 9:50 p.m. an officer on patrol observed an unknown person wandering through a house that was under construction.  Further investigation revealed that it was the owner of the residence looking at construction progress.

Suspicious Vehicle – 200 blk. Meadowknoll, Double Oak – A house sitter reported two unknown persons standing by a car at 12:41 a.m.  Further investigation revealed one of the persons was being dropped off at their residence.

Assist Motorist – 200 blk. FM 1830, Argyle – Officer assisted with an early morning welfare check on a vehicle passenger that was intoxicated on alcohol and required medical evaluation.

Motorist Assist – FM407, Denton County – Officer assisted (with the help of an off duty T.A.B.C. officer)  juvenile motorist who had broken down on FM407 at 2:30 a.m.  Officer remained with the young motorist until their parents arrive.

Theft by Deception – 200 blk. Whistling Duck, Double Oak – A homeowner contacted a fence company to obtain paint / repair estimates.  A representative of the company took a $500 dollar deposit and never returned to do work.  Complainant reported that they attempted to work with the company and was told that they didn’t care if they were sued or the police were called.  A criminal investigation is ongoing.

Fraud – 100 blk. Foxtrot Ln., Double Oak – A resident reported that an unknown person had obtained credit, in their name, from Verizon.  The suspect obtained over $4,100 dollars’ worth of goods using the Complainant’s information.

Welfare Check – 200 blk. Simmons Rd., Double Oak – A relative was concerned about the welfare of a family member.

Ordinance Violation – 100 blk. Highview Dr., Double Oak – A witness reported a solicitor going door to door and leaving flyers (alternately skipping some homes).  Officer made contact with the individual and issued a warning for soliciting without a permit.  Subject was skipping houses as he worked for a painting company and was only leaving flyers on homes that he felt needed to be painted.

Motorist Assist – Cedar Crest and Justin Rd., Double Oak – Officer helped to move a stalled car out of the way of traffic.

Assist Agency – 900 blk. Terrace Dr., Lantana – A disturbance resulted in an adult male receiving serious bodily injury from a knife or possibly knives.  Double Oak and Bartonville Police responded to the location and detained a suspect until the arrival of Sheriff’s deputies.

Arrest – 400 blk. Oak Trail, Double Oak – A small blue car was observed speeding on Simmons Rd.  When stopped the motorist was determined to have a suspended driver’s license, no insurance, and multiple warrants for their arrest and was in possession of drug paraphernalia.  A female 33 years of age was taken into custody and transported to Flower Mound jail.

Traffic Stop/Arrest – 4200 blk. Cherry Creek, Highland Village – During the conduct of a traffic stop a male, twenty-six years of age, was found to have warrants from Double Oak and was arrested and transported to Flower Mound jail.

DWI 3rd or More – 100 blk. Brown Cliff Ct., Double Oak – A constable observed a male, fifty-six years of age, attempting to flee the scene of a minor vehicle accident (he had collided with a utility box).  Field Sobriety testing was conducted and the motorist was taken into custody for suspicion of driving while intoxicated.  Arresting Double Oak Officer obtained an evidentiary warrant for blood and then the subject was transported to Denton County Jail.  Arrested person was charged with a felony due to multiple prior DWI convictions.

Suspicious Circumstances/Criminal Mischief – 200 blk. Valley View Trail, Double Oak – On Friday August 21 at approximately 9:00 p.m. Complainant heard what they thought was a squirrel on the roof of their house.  Later they realized that an unknown person had pried a screen off of a window in the back of their home.