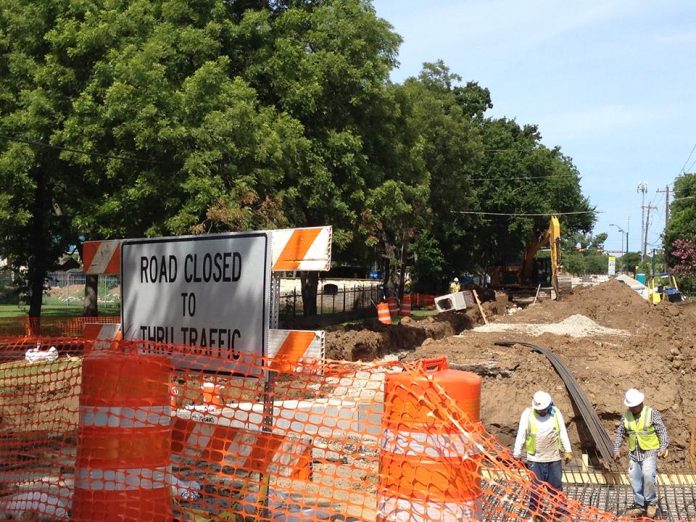 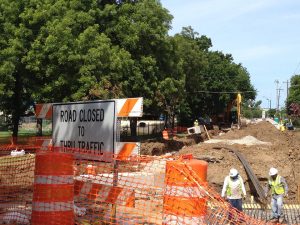 Editor’s Note: This is part 1 of a three-part series about the Sagebrush Drive widening project.

Work is already in progress widening the west end of Sagebrush Drive in an effort to make it safer, but some who live on the short strip of road want Flower Mound officials to rethink the plan, worried that the finished product may have a frustrating impact on their lives.

Included in the town’s plans is a drivable stamped color concrete median that is flush with the concrete paving adjacent to residential properties. The hope was that such a device would help stem speeding, which has become an issue.

“Speeding was one of the major concern of the adjacent residents even prior to the beginning of public hearings for the project,” said Ken Parr, public works director, in a letter to residents.

Two other options for Sagebrush were presented to residents during a series of charettes over the past two years. But that doesn’t mean everyone concerned is on board with the work.

“No one is asking the town to not improve and widen Sagebrush and add sidewalks,” said Kris Thompson. “The residents just do not want a median. It is not that complicated. You try backing out of your driveway with a median in the middle of your residential street. It just isn’t necessary.”

This part of Sagebrush ends at Old Settler’s Road, at Flower Mound High School. Because of its high traffic volume, Sagebrush is designated as an urban collector street in the town’s throroughfare plan, Parr said.

“Sagebrush residents are aware that some students speed down Sagebrush,” Thompson said. “The police need to put a stop to that. A few weeks of speeding tickets and insurance rates for teen drivers being impacted and the speeding will stop.

“The police and their parents and the teens need to be responsible for their behavior. It should not require the residents along Sagebrush to be inconvenienced by a median down the middle of a road that is one lane each way. That makes no sense.”

A meeting was held within the past week with residents who live on and around Sagebrush. Itamar Gelbman (Place 5) and Brian Rountree (Place 1), two of the council’s newly minted councilmen, attended the meeting.

Resident Tamiko Ryan said the project was approved and the town should move forward and not risk being held financially liable for backing out of the project.

“That design has been in place for a over a year,” she posted on the Facebook page Flower Mound Cares. “So why is it being debated now? We know why. New members!”

On June 1, the town council voted unanimously to award a $2.4 million to CD Builders. At that time, no council members objected to the details of the project.

“I am concerned that we continue to debate issues that have already been decided,” Ryan said.”This council voted on June 1st to continue with the project. Several members meet with residents that live on Sagebrush and now we have the same issues being presented that have already been debated. We have debated these problems for over a year and spent 1 million dollars on the project design.

“This is about our image as town council. We need strong leaders that are decisive. Rejecting a road design when several where presented, debated, redesigned, and then approved is not the way to do business. Every contract has a clause to allow you to get out, but the clause doesn’t extend beyond the point of no return – they have already started the work and now you want to back out, really! What sense does that make? What image are we delivering to potential developers? There is the very reason we are know to be the town that is difficult to do business with and this is that very reason.”

Neighborhood meetings were over the past two years to review the plans as they were completed 30 percent, 60 percent and 90 percent of the way.

As of press time, Gelbman and Rountree did not return requests for comment.

Find out tomorrow in part 2 if nixing the project now that work has been started could have a financial impact on the city.