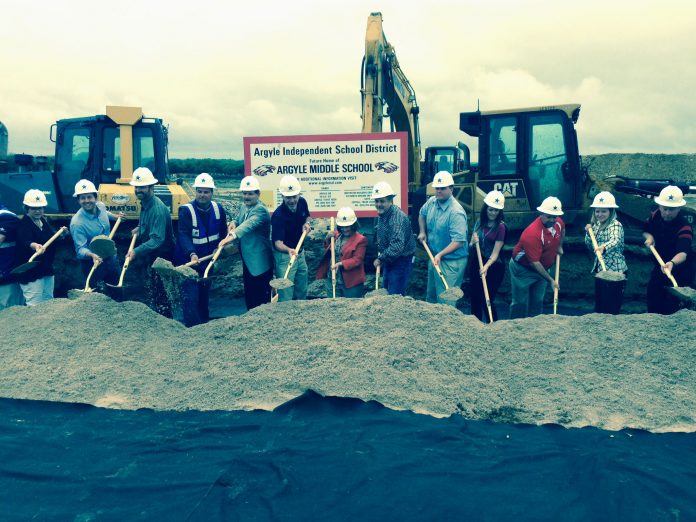 Shovels split earth Friday in west Flower Mound as construction of a new place for students to build their brainpower began.

Officials from Argyle Independent School District and surrounding areas broke ground on the new Argyle Middle School, which will have room for 1,000 students in grades six through eight. It is expected to open in August 2016.

“As one of the region’s fastest growing school districts, the new middle school will free up space in our intermediate school and high school, allowing us to maintain the small class sizes so important to the academic success of ours students,” said Telena Wright, Argyle ISD superintendent.

“And, the new technology in the middle school will provide our students with the tools and skills needed to succeed in both high school and college.”

The first level of the new school, at 118,858 square feet, will include administration space, a 75-student media center, band hall, 500-student cafeteria, a 452-seat competition gymnasium and physical education court with locker rooms and 20 classrooms.

The second level at 35,678 square feet will have 17 classrooms and six combined science classroom/lab spaces.

The school’s main entrance will face the northwest with about 224 parking spaces. A four-lane cinder practice track and field area is planned with no lighting or visitor seating.

In March, a record plat and site plan called for a 154,536-square-foot middle school to be built on an estimated 107.5 acres set aside for a school in the Canyon Falls master-planned community situated in Flower Mound, Northlake and Argyle.

At some point, depending on projected growth, the middle school will be expanded with additional facilities to house Argyle High School while the existing high school becomes the middle school, officials said.