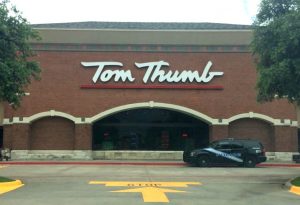 Thanks to tips from residents, a suspect connected to the Tom Thumb pharmacy robbery was taken into custody Friday around 6 p.m. in the Chaucer Estates subdivision in north Flower Mound.

Police did not release the suspect’s identity since he is under 17 years old but did say that he is a Flower Mound resident.

It happened inside the Tom Thumb on FM 407 at Morriss Road just before noon on Friday.

The suspect approached the pharmacy counter, displayed a a small dark-colored revolver and got away with narcotic medications, according to police.

According to witnesses, the suspect was a heavy-set white male about 5-feet, 9-inches tall with acne. He was wearing a blue hoodie with white shirt, blue jeans and black shoes, and had on a red cap with a gold brim that possibly had a San Francisco 49’ers logo on it.

Nobody was hurt in the incident.