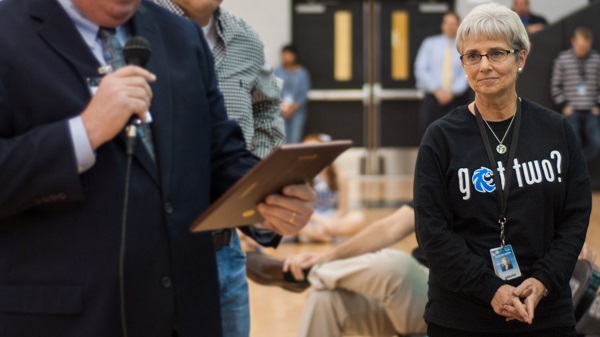 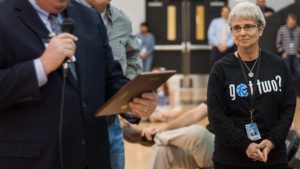 Barbara Fischer, the only principal Guyer High School has known, has announced her retirement, ending a storied history with Denton Independent School District.

Fischer, who helped open the school in 2005, will finish out the 2014-15 school year before ending her near 30-year run in education with Denton ISD. Guyer achieved significant success across academics, fine arts and athletics under Fischer’s leadership, making the move a difficult one for her.

“It’s a very bittersweet decision for me because I love Guyer High School, and the kids and people at Guyer are the best around, but I know now is the right time,” she said.

Since its opening, Guyer has annually outpaced the state average in the STAAR academic test by significant margins, and it routinely has students recognized nationally for their accomplishments. Guyer accounted for Denton ISD’s three National Merit semifinalists in 2014, for instance, and it annually has dozens of students recognized as Advanced Placement Scholars.

The school’s academic success under Fischer has been matched in extracurricular activities, as Guyer has won three state championships in its short history: the 2013 and 2014 UIL 4A Division I state football championships and the 2013 UIL 4A state girls’ soccer championship.
Fischer said building a “tradition of excellence” has been fun, adding that she will miss her interactions with students the most. The Guyer principal has missed a portion of the school year while recovering from a medical ailment, but the support the students have shown her through her recovery has been overwhelming, she said.

“The kids are what truly keep you going in this business, and you don’t get to see that unless you see them and spend time with them every day,” Fischer said. “The encouragement they’ve given me this year … it just makes me feel very good to know that Denton ISD has such giving and caring kids that are going to be the future leaders in this community.”

In addition to her time at Guyer, Fischer has served in various roles in Denton ISD, helping oversee several schools during a period of tremendous growth.

Mario Zavala is director of communications for the Denton Independent School District.