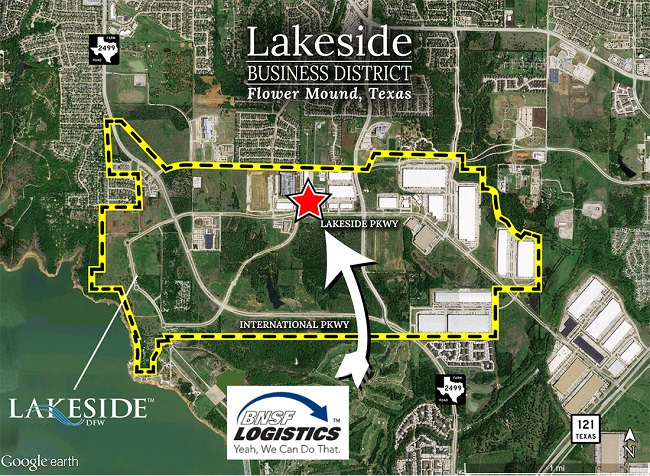 The $19.6 million industrial complex being built by EastGroup Properties Inc. in the Lakeside Business District is expected to be finished this summer.

The Jackson, Mississippi-based company currently has about 6.8 million square feet of properties under construction or on the prospective list across the U.S. including San Antonio, Houston and Dallas as well as Charlotte, N.C., Tampla, Fla. and Phoenix, Ariz.

An estimated 280,000 square feet of speculative space will be available to businesses large and small, said Mark Wood, economic development director for the Town of Flower Mound.

Prospective tenants will have the flexibility to have a smaller footprint – as little as 10,000 square feet – in one of the three buildings and create their own combination of office and distribution space, he said.

The property at Spinks and Gerault roads sits across the Flower Mound Community Activity Center and the surrounding park, hence the development’s name – Parkview Commerce Center.

Having flexible spec space in a key to drawing major employers to town, Wood said.

“It gives us product that we can sell,” Wood said. “It’s easier to sell a building when they see movement. It’s easier for them to visualize.”

Nestled in what is considered the hottest market in the state – North Texas – as well as in the U.S., Flower Mound is seeing major interest due to its availability of land and buildings as well as the favorable climate – low tax rate, housing supply for staff and the town’s emphasis on growing the job market to help residents live, work and play in their own community, he said.

Including the buildings under construction, the occupancy rate remains in the 90 percentile range.

In two years, more than 3 million square feet of commercial space has been added in the Lakeside Business District, adding more than $100 million to the town’s property tax rolls, Wood said.

“Residents drive through every day,” he said, “but they don’t see how it contributes back to the town.”