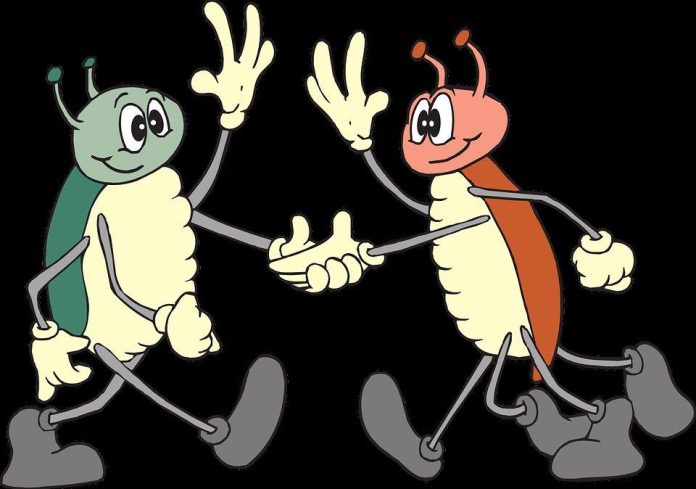 Don’t read this if you don’t have a strong stomach. I don’t but I felt I should warn others of the perils of bugs in unexpected places at unexpected times…especially with this being the season for bunches of baking ~ beware.

Banana bread is one of my favorite holiday pleasures. As the name implies one of the main ingredients is, but of course, bananas. It’s a given you have to peel them before you can use them in this dish. However, don’t be cavalier about discarding them. Flies find banana peels a most desirable place to lay their eggs. I have a hideous memory of a fly in the house after some peels had beckoned from the trash can. It was the morning after I had made banana bread. Shoeless, I stepped onto the kitchen floor and felt something squishy between my toes. OMG the floor was literally covered in maggots! They were fat, squirmy, wiggly, disgustingly dirty white larvae slithering all over the place. I couldn’t get ahead of them. They just kept pouring out of the trash can…DUH didn’t dawn on me to take it outside. I tried to coral them using a broom but they just rolled up into a ball. So sweeping them into a dust pan was just silly because they simply unrolled and wiggled out. It was all I could do to keep from losing my Christmas cookies. I found a container of insect killer and liberally coated the entire kitchen floor. The “new and improved” pleasant scent described on the can wasn’t what it was cracked up to be and contributed to my nausea. All it did was make the room reek and had a limited effect on the maggots. Frantic and desperate I tiptoed to the pantry to fetch the hand held vacuum. And wouldn’t ya know larvae had slithered under that door as well! Bending way forward, to grab the vacuum without having to move my feet again, I was able to suck up a reasonable number of the sickening worms and remove the trash can.

For weeks on end as I’d cross that floor I was fearful there might be more maggots in store!

A more recent encounter with creepy-crawlies also stems from me and my banana bread. I had pre-measured my flour and sugar out into bowls before dealing with the bananas, butter and eggs. When I started to add these other ingredients I could have sworn I saw the flour move! At closer inspection I did see the flour move! It was full of teeny, tiny, itsy, bitsy brown bugs. And the bag of flour up in the cabinet was infested as well. These little creeps were running rampant on three of my cabinet shelves! I hardly felt I deserved such a fate especially since I consider myself a pretty tidy housekeeper. So how did these nasty critters invade MY clean territory?

Sometimes Google can be a very good thing and I turned immediately to Siri for an answer. I wasn’t crazy about the explanation but at least I learned what to call these insects and what to do about them: they are called WEEVILS and come in many varieties. Evidently they are not fussy as to how many food groups they live in. But the ones that are of most concern to me are those containing dry wheat, flour, oats, rye, barley, rice and corn. So on Siri’s recommendation, much to my chagrin, I purged my pantry and cabinets of all of these items. $$$. Out came the vacuum cleaner, next the hot soapy water and then a strong solution of vinegar water.

Before restocking the internet advised to be sure and check the expiration date on any and all packages. It was explained that weevils can survive food processing and packaging. The females will then lay eggs inside the grains, or even in the crevices of the bags. So for flour and grains, in particular, put them in the freezer for at least one week before storing them in the house. Now, mind you, this does not make the weevils disappear, they just freeze to death. And if you don’t notice them moving around in your mixing bowl and pour them into your recipe, well, after 140 degrees for 15 minutes they go belly up.

So what I came away with is this nasty fact:

The only way to get rid of weevils is to eat them ~ for dinner, for lunch or even a snack.

Don’t be alarmed ‘cause this is okay,

Since they’re loaded with protein you need every day!