Many local police departments are paying tribute on social media to a Carrollton police officer who was killed in an on-duty crash Tuesday night.

At 10:24 p.m. Tuesday, Officer Steve Nothem arrived to back up a fellow officer on a DWI arrest on President George Bush Turnpike when his squad car was hit by another driver while Nothem was still inside, according to a news release from the Carrollton Police Department. The driver who hit him, 82-year-old Phillip Parker of Carrollton, was pronounced dead at the scene. Nothem was transported to a nearby hospital, where he was pronounced dead.

Nothem leaves behind his wife and four children, a 13-year-old son, twin 6-year-old sons and a 1-year-old daughter. Nothem served for many years in the U.S. Marines, four years in the Grand Chute, Wisconsin Police Department before joining Carrollton PD in March 2020. 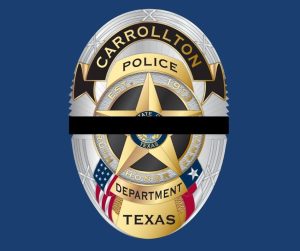 In honor of Nothem’s death, most, if not all, local police departments are changing their profile pictures on social media and offering their condolences to Nothem’s friends and family.

“Our hearts are heavy this morning over the loss of a Carrollton Police Officer last night,” the Lewisville Police Department said in a statement. “We send our deepest condolences to the officer’s friends and family, our brothers and sisters in Carrollton Texas Police Department, and the Carrollton community.”