The Bartonville Town Council voted unanimously Tuesday night to approve a Conditional Use Permit for a new Whataburger restaurant on the eastern corner of FM 407 and Blanco Drive in Lantana Town Center.

The new restaurant will be open 24/7, and it needed council approval because of the drive-thru window. The site plan shows that traffic will use Blanco Drive to get into the parking lot, and there won’t be any direct access to FM 407. 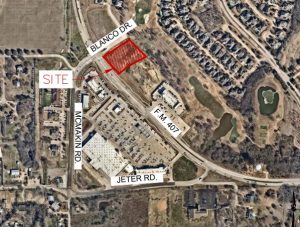 During the public hearing, about a dozen people — mostly Blanco Drive residents — spoke in opposition to the proposal, citing concerns about safety, noise and an increase in traffic on their street. Many were especially opposed to the 24-hour nature of the business.

“The wrong elements are going to be invited into Bartonville and Lantana because of the 24/7,” said Lantana resident Charles Nuber. “What are you inviting into the area?”

After hearing previously voiced concerns, Whataburger changed the orientation of the site plan to have the drive-thru speakers facing toward Blanco Drive, away from the homes in Lantana. A police officer will be on-site from midnight to 4 a.m. on weekends.

No construction timeline has been announced.