The Lewisville Police Department is asking for the public’s help in identifying a car and driver that allegedly struck an elderly pedestrian and fled the scene last week. 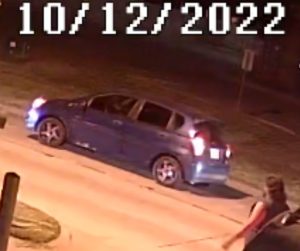 Around 10 p.m. Wednesday, a 73-year-old man was pushing a wheelchair while crossing the street in the 300 block of Lake Park Road when he was struck by two vehicles, according to Lewisville PD. He remains in the hospital on Monday.

Both vehicles fled the scene, eastbound on Lake Park Road, without rendering aid to the victim. The drivers might live in the nearby apartment complexes, according to police.

Police have identified the blue car and driver, but they are not in custody and the investigation is ongoing. Police are still asking for help in identifying the other car and driver. If you have information, contact LPD Investigator T. Thomas at 972-219-3694 or [email protected]