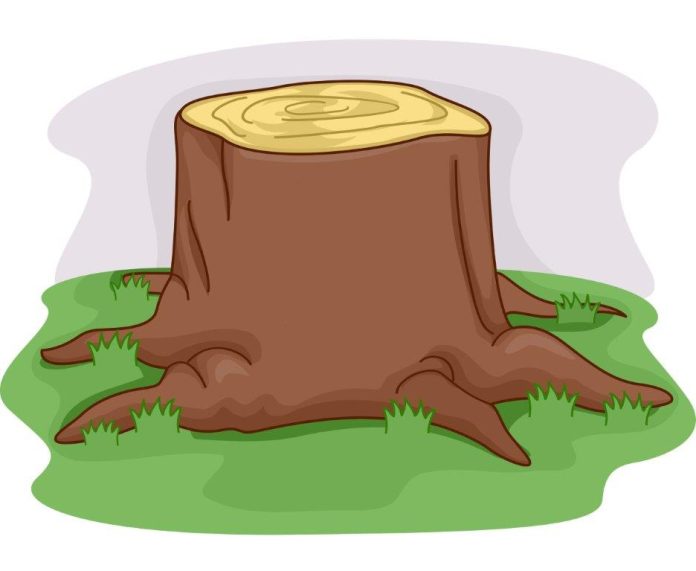 Recently we had to bid adieu to a couple of very, very old friends. We’ve known them for over 35 years and have watched them grow tall and strong. And in their latter years they grew quite rotund as many of us have a tendency to do. I might describe them as being a couple of shady characters but in their case this was a good thing! As they matured they branched out in the world. They provided lodging for a variety of those seeking housing in the great outdoors. And on sultry Texas summer days they offered cool comfort from burning hot rays.

They’d been so healthy for so long until one day they began to display symptoms that something was wrong. The once dinner-plate-size, bright, green leaves became dwarfed and limey green in color. The fuzzy balls the size of brussel sprouts were slightly larger than a dime and the trunks showed no shame in being naked. Virtually all of their bark peeled away revealing lily white skin. So we contacted an arborist who gave us the bad news. Unfortunately, they had fallen victim to disease and we were unable to get to the root of their problem.

In trying to look on the bright side of cutting down trees I’m going to go out on a limb here. One of them loomed large over the pool, and would drop leaves, balls and bark even in a healthy state but certainly not at this rate. This behavior wreaked havoc with the pool sweep making it unable to clear its throat. And so it would choke which caused maintenance to be a constant chore. In the fall the two trees vied to see which could produce more. That was top side. Underneath was an entire network of enormous roots that had surfaced and stemmed off in all directions. One of those directions was toward the pool. It was just a matter of time before it would find its way to the gunite and crack the shell…now wouldn’t that be swell?

Comprised of very soft wood, throughout the years large branches had broken off and weakened the trees’ integrity. Every time we’d get one of those OMG wind storms I’d watch with bated breath as the sycamores swayed violently. I’d wonder when they’d uproot and come crashing down…the tallest would certainly land forcefully smack dab on our roof. So it was with mixed emotions and a hungry checkbook that we witnessed the demise of our age old timbers. The squirrels and a few birds watched from a distance as the giants were cut down to size. All that was left were the stumps…to be ground down at a later time.

We wanted something quick to grow
When we moved here long ago.

There were no trees, no grass at all
We needed something to grow tall.

A sycamore would work the best
We didn’t know about its mess.

And o’er the years it grew just fine
Until it started to decline.

No more sycamores…that’s no joke!
Next tree we plant will be an oak!