After the Flower Mound Town Council denied a proposed warehouse park next to Canyon Falls on Monday, the developer, Crow Holdings, said it’s too soon to say if it will keep trying to buy and develop that land or if it will give up on it.

If Crow Holdings does continue to pursue the land, though, the town has made it clear that warehouses are a non-starter.

Starting about six months ago, residents of Canyon Falls and other parts of west Flower Mound organized to oppose the Cross Timbers Business Park, a proposed 10-building industrial development with 3.3 million square feet of warehouses on 263 acres next to Argyle High School and the Canyon Falls development. Crow Holdings argued that the proposed development aligned with the the town Master Plan land use map for that property — located in the northeast corner of Hwy 377 and FM 1171 — and it would bring millions of dollars in tax revenue to the town of Flower Mound and Argyle ISD. Opponents pointed out that the land use map for that property has not been touched in over 20 years, long before the Canyon Falls and nearby Trailwood subdivisions were developed and Argyle High School was built, and the property is no longer suitable for warehouses. The land has not been zoned, but has held the Interim Holding designation since it was annexed in 1999. 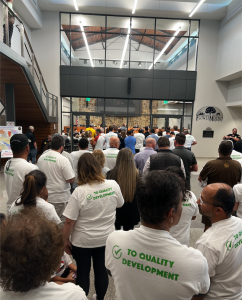 Upon learning about the proposed warehouse park last fall, nearby residents immediately began calling and emailing Flower Mound Town Council members to express their opposition. More than 1,500 people joined a Facebook group called NoMo FloMo WAREHOUSES. Many residents spoke during the public comment portion of recent Planning & Zoning and council meetings — before the development had even been on the agenda for consideration. The Argyle ISD Board unanimously approved a resolution of opposition, and last week, the Flower Mound Planning & Zoning Commission unanimously recommended denial of the project. On Monday night, the Town Council actually approved Crow Holdings’ zoning request for Campus Industrial and Industrial District-2, but they limited the uses within those zoning districts and eliminated some uses, including warehouses, landfills, racetracks, extended-stay hotels and more. Then the council unanimously denied the proposed Cross Timbers Business Park. The decision was met with cheers from those in attendance and the many members of the Facebook group.

“Council chose uses they felt were appropriate for the land, including many retail, office, and commercial uses, among others,” a town spokesperson said in a statement Thursday. “As indicated by Councilmember (Adam) Schiestel’s motion, compatibility with adjacent developments and land uses is an important consideration when zoning land … Any future application of an allowable use will require Council approval of the concept, landscaping and elevation plans.”

Will Mundinger, founding partner and senior managing director of Crow Holdings Industrial, said Wednesday that he had been hopeful that the “facts would outweigh the fear, unfortunately, that didn’t happen.”

“We don’t see this decision as solely a loss for the Cross Timbers Business Park, we see it as a loss for the Town of Flower Mound,” Mundinger said. “This was a carefully thought-out development that provided an opportunity to use this land as it was intended.”

Mundinger said it is “too early to say at this point” if Crow Holdings will continue to pursue a development on that tract of land with the new restrictions from council or not. The company was in the process of buying the land if it could get approval.

“Any decision about the future use of the land will be up to the landowner,” Mundinger said. “As for Crow Holdings, we will continue to develop best-in-class business centers, which are necessary as our region continues to grow.”