Argyle ISD will host a Town Hall Meeting on Tuesday night to gather feedback about a large proposed warehouse development next to Argyle High School.

Crow Holdings has submitted to the town of Flower Mound a site plan proposal for the Cross Timbers Business Park, a 10-building warehouse park in the northwest corner of FM 1171 and Hwy 377. The proposed buildings would total nearly 3.3 million square feet with one building as tall as 60 feet and others up to 45 feet.

The land, directly adjacent to the Canyon Falls subdivision and Argyle High School, is currently classified Interim Holding, a designation give to land after it is annexed. The land must be zoned by Town Council for it to be developed for any purposes other than Agricultural uses. The town’s 2001 Master Plan has commercial and industrial designations for the land, and it has not been updated since then. The Master Plan was amended in 2008 to change the land where Canyon Falls now is to residential, and the same was done in 2015 for the Trailwood subdivision south of FM 1171.

A large number of residents in the Canyon Falls/west Flower Mound area is vehemently opposed to the proposed development, citing several reasons including the land’s proximity to the school and Canyon Falls homes, traffic, safety, noise, pollution, home values and more.

Will Mundinger, founding partner and senior managing director of Crow Holdings Industrial, has said an economic impact study indicates that once the project is complete and leased, it would generate $2 million a year in tax revenue for the town of Flower Mound and $7 million for Argyle ISD.

More than 1,200 people have joined a Facebook group called NoMo FloMo WAREHOUSES. Hundreds of residents have emailed and called Flower Mound Town Council members and spoken during public comment sections of council meetings to express their opposition to the proposed development. They are pointing to the fact that the area looked very different in 2001, when this parcel of land was designated for industrial uses in the town Master Plan, than it does now. Many Canyon Falls residents have said during meetings and on social media that they would much rather see retail and commercial development on the land. 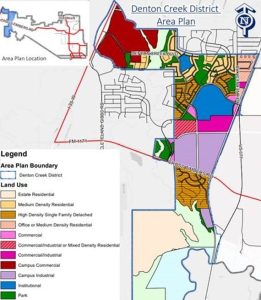 Brad Cooper, managing director of Crow Holdings Industrial, has said the location — close to the I-35W/Hwy 114 interchange, at the corner of two other major thoroughfares — was key, as was the land availability and the town’s Master Plan aligning with the development.

The proposed development is currently under review by town staff. It has not yet been scheduled for a public hearing and recommendation from the Flower Mound Planning & Zoning Commission, and once it does, it will go to Town Council for approval. However, Crow Holdings has indicated that representatives will speak briefly about some changes it has made to its proposed development during the public comment section of Monday night’s P&Z meeting. Opponents of the proposal are also planning to speak.

Then on Tuesday night, Argyle ISD’s Town Hall meeting is scheduled for 7:15 p.m. in the high school auditorium, 6601 Canyon Falls Drive. All community members are invited to attend give their feedback about the proposed warehouses. The district has also invited Flower Mound Town Council members to attend.

“We hope that residents will show up to be heard and to be informed about what could be going on behind their children’s school,” Francis said. “We’re hoping Argyle ISD will come out publicly in opposition.”