Parker: Growing up on Ronald Reagan

Growing up strongly influenced with love and respect for our great Nation, I took an immediate interest in President Ronald Reagan, my political hero. I became energized by his leadership as a true statesman guided by his unapologetic faith who deeply loved his family and country.

I watched his debates and speeches on television, and like my fellow Americans, developed a fondness for his demeanor, compassion and sense of humor. When I was older, I understood and appreciated his policies as much as his personality: lower taxes, less regulation and a smaller, less intrusive, government. At home he was a solver of problems, and on the world stage he was a constructive leader and builder of bridges. 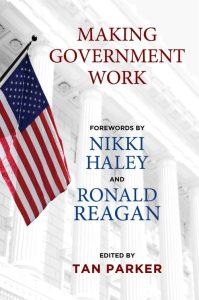 In his original preface of “Making Government Work,” Reagan once wrote that during his time as Governor of California he “realized that the biggest problems we had regarding big government had to be solved in Washington, which was gradually but inexorably taking power from the states.”  He reflected on the significance of moving to a good governance that was beginning the process of returning to the states some of the powers they need to meet the needs of their citizens. In his remarkable wisdom, Reagan called for this effort to be continued–and met by new proposals for action by the states and localities. After all, the government closest to the people governs best.

Serving in the Texas House of Representatives, I have witnessed firsthand the impact that a state like Texas can have on the future direction of the Nation. I am reminded of the principle that the federal government didn’t create the states; the states created the federal government. The Founders’ belief that stronger states make for a stronger union is alive and well today in state capitols across the country. The legacy and principles of Federalism, which Reagan so artfully championed, are alive and well – especially in Texas.

Yet, we must also remember Reagan’s wise words, “freedom is never more than one generation away from extinction. We didn’t pass it to our children in the bloodstream. It must be fought for, protected, and handed on for them to do the same, or one day we will spend our sunset years telling our children and our children’s children what it was once like in the United States where men were free.”

It is up to us to carry on, to teach Reagan’s legacy and the principles of federalism to the next generation. There is no better torchbearer than the late president’s namesake—the Ronald Reagan Presidential Foundation and Institute.

Recently, I was honored to welcome the Reagan Presidential Foundation to Texas at my alma mater, the University of Dallas. Partnering with my good friend and Reagan administration alumni Merrie Spaeth, we joined with the educational team to highlight the Reagan Foundation programs now available to students and educators right here in Texas.

The Reagan Foundation knows that when leadership skills are nurtured and developed in students, the result will be a new generation of thoughtful, proactive, action-oriented American citizens and a stronger democracy. Through state-of-the-art programs, immersive learning experiences and digital technology, they are now able to offer programs and scholarships to students and educators in Texas, such as “virtual” leadership experiences and field trips, an online leadership certification program, creation of an expanded curriculum (including a high school course on Reaganomics) and a summer camp program that includes overnight accommodations at Pepperdine University.

High school students can now also earn certificates in Leadership and Communication through the Reagan Academy. Their cutting-edge materials are tailored to help students develop the necessary skills for embarking on the next chapter of their lives. A thoughtful perspective in civic engagement and good governance are precisely the sorts of skills that help them stand out for scholarships, university admission, and future employment. Upon completion, students will receive an exclusive Presidential Leadership Certification. You can learn more about the program here: www.reaganfoundation.org/education/e-learning/leadership

Regrettably, we have watched the emergence of violence in our society coupled with an ideology that seeks to rewrite history and impose extreme political correctness that pits neighbor against neighbor. To protect and build upon the gifts of freedom, democracy, and thoughtful leadership, it is paramount that we encourage the next generation of leaders to understand the founding principles which have made America a beacon of hope around the world. It is our children who will pave the pathway for a brighter tomorrow. President Ronald Reagan’s timeless teachings are just as relevant today as they were when he led our great Nation 42 years ago, and his legacy is a gift to this and the generations that follow.

It’s an honor to represent you in the Texas House of Representatives, and I hope you will stay in touch by emailing [email protected] or calling 972.724.8477. You can also follow me on Facebook, Twitter, Instagram, and LinkedIn.