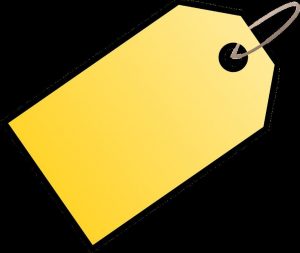 Remember as a kid playing tag? It was probably one of the more popular forms of outdoor entertainment. Of course, that was when kids played outside, before the advent of kidtronics drew them indoors like a moth to a flame. To avoid the tag was the object of the game. To this day avoiding all tags is very important! I detest them in any form and they come in a vast assortment.

For instance, tags sewn into the back of the neck of blouses, shirts and sweaters will rub you the wrong way. But you can’t just take a scissors and cut them out. No way. I’ve tried this all too often to learn that they’re stitched all the way through to the outside of what you wear. Even using a seam ripper will produce tiny tears.  Fortunately, they are tiny and not particularly noticeable. (Now if someone comes up behind you and sticks their nose in the nape of your neck, that’s a different story. But really who does that?!) The more the garment is washed the larger the openings stretch. So whenever you want to buy a replacement that’s sure to ensue there won’t be a size you can refer to.

I felt it was a blessing when someone invented the tags that are stamped into material. No more scratchy, annoying little buggers that sometimes pop right out of collars. No worries about creating holes. Instead, the time spent in the washing machine begins to take its toll. The imprint slowly fades and eventually becomes impossible to read. When trying to determine what size underwear to buy for your loved one for Christmas…it’s something you really need. (And dare I add this disappearing act applies to bras as well?)

Towels have remained unstamped and usually sport two tags. One appears as though you can just rip it right out without a hitch. While the other is larger and often made of a fabric that feels like silk. Naturally, both labels are permanently imbedded in the hem of the towel. So while you may decide to attack the stiff one the resistance has been a pain. Time to take a break and let the softer of the two remain.

And OMG pillows! I’ve see as many as four tags each! There is always this one tag that says, “Do Not Remove Under Penalty of Law” (except by the consumer). The meaning of this has always baffled me. So I Googled it, had to see. What if the Pillow Police were to darken my door and want me to prove I was the owner for sure? (I‘ve long since discarded the receipt.) Out of fear of this scenario I came up with a way to satisfy the Heat. I’ve implemented a fix by using a large safety pin to fasten the tags. Now they don’t show from the front and truly that is all that I want. Daring to sever this particular tag’s death grip just isn’t worth it!

And then, in the same family, are the stickers that retailers generously adhere to many of their products. Way far too many to mention I’ll just throw a few out there that immediately garner my attention: glassware, lamps, vases, picture frames etc. These seem to embody the toughest adhesive known to man.  In addition, picking at a corner in hopes of peeling the sticker off all in one piece is just a silly notion. I do have a handy little tip to help with the removal of this. WD-40 works like a charm and to the item you’re scrubbing will not cause harm.

Now that the bashing of tags has come to an end I’d like to give credit and also defend SHEETS. The makers of bed sheets get my vote. The tag in the upper left hand corner of the sheet (underside) always goes at the top left corner of the bed. Every time I change the linens I can depend on this clue. And so now that I’m through…

It’s the end of the day and the grandkids are here.
I’m through cutting labels. I’d like a cold beer.
They want my attention…they want to play games.
Staying inside seems like a shame.
Guess we’ll be going outside for a bit
Where they can learn TAG and I can just sit!