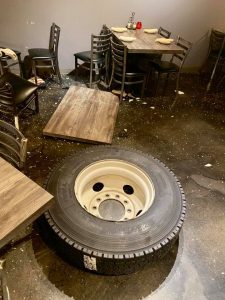 A Northlake restaurant is closed indefinitely because a truck tire smashed through its storefront over the weekend.

A tractor-trailer was headed west on Hwy 114, nearing the I-35W interchange, about 11:30 p.m. Saturday when two tires somehow came off of the cab on the driver’s side, according to Northlake Police Chief Robert Crawford. One of those tires flew at a high speed into the front window of Amano Italian Bistro, 5000 Hwy 114. Crawford said police don’t know how the tires came off, and they don’t know where the other tire went.

The restaurant closed at 10 p.m., and the family that owns and operates the business had planned to stay late that night to celebrate Gentiana Raka’s birthday, but when Raka’s daughter fell asleep, they decided to take the party elsewhere.

“We are so thankful that we weren’t there,” Raka said. “We really dodged a big catastrophe for our family.”

Raka said the family was in disbelief when they saw the damage, and now they are waiting for the truck driver’s insurance adjuster to assess the damage before they can start cleaning up and making repairs. They’re hoping to be able to reopen within the next two weeks, or to at least be able to offer carryout service.