The Soapbox: The steak sauce shortage that almost ruined the world 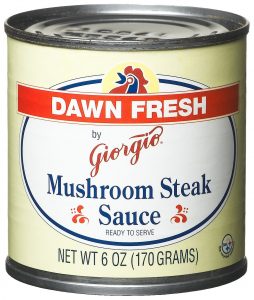 Most every child has memories of playing “string telephone” using a paper cup or tin can. One friend talks and another listens as the sound waves travel from one to another. Then, the other friend processes what he or she has heard and returns his own thoughts. Like this educational childhood game, some recent happenings over the sound waves of social media in and around my country home, in the land of The Big AP, have sent shock waves of panic to Cajun gravy makers throughout the region.

It all started very innocently one day as my sister and I received a grocery order from Instacart. We stood in the kitchen, oil and spatula in hand, awaiting the shipment and ready to feed our family some of the best delicacies no money could ever just “buy.” Our cooking, handed down from our mother and the French women throughout the generations, is not only an art form, but a way of life.

We weren’t quite sure we heard the delivery driver exactly right when she announced ever so nonchalantly that she had simply substituted that little can of steak sauce we wanted with a powdery mix. The kitchen was hustling and bustling with ballerinas and soccer players, so amidst the shuffle we asked her to répétez-vous that right along. Come again???!

At first mention, it seemed like no big deal; however, the delivery driver went on to explain that because of the global pandemic of COVID-19 that the supply chain had been broken. For items like this one tiny little can of steak sauce, it had been easier to discontinue it than to try and provide scarce amounts of it.

“Did she just call it the little can of steak sauce?” I asked myself, wanting to give her a full education. Inside this one little can of the product called Dawn Fresh by Giorgio Mushroom Steak Sauce was not only magic, but it was the ancestral secret to South Louisiana brown gravy. A mother’s milk to us, the signature sized yellow can with the rooster on it was essential to proper living down on the bayous of home. A gravy made from the heart with Dawn Fresh set the world right. A gravy made without it was no gravy at all.

I hated to be the bearer of bad news, but I immediately took to social media after looking in my pantry only to find one last can of goodness. I let my 5,000 friends know that, sadly, the product had been discontinued. Someone on my page, feeling the impending frenzy, picked up my post and carried it over to the hometown phenomenon known as What You Got In Dat Pot, a site of some 65,000 followers that I recently penned about in my column Gumbo Police: Fraud In That Pot. The equivalent of a Duck Dynasty without a faith-based emphasis, three hometown boys posted wild antics at the “camp” where the best crazy times and gravies are made. Crazy is a compliment in the Franglish language of home. I cannot be responsible for anything posted on the page, but will attest to the amazing dishes posted there.

So between my mere 5,000 followers and their 65,000 followers—I had inadvertently panic peddled the innocent little yellow can. People began to make posts to share where they might be able to order 10 cans on Amazon or say something like “Piggly Wiggly in Bunkie has the shelves fully stocked with it.” Then a post might come out that, in fact, the product had NOT been discontinued and just the other day it was at Shawn’s Grocery in Cottonport.

One particular day, I called into the hometown to pay a bill by phone—because that is how it’s done there with landlines and envelopes. As we are finishing the transaction, the stranger’s voice on the other end of the line says, “You’re wrong about Dawn Fresh, you know.” I said, “Excuse me?”

“Yes, Brandi, I saw it at Harvest Foods in Marksville, there is plenty to go around.” I heeded the unfamiliar voice and made a post about how wrong I was and how plentiful the gravy was flowing in Marksville. The next day, another friend texts me the sign that had been now put up at Harvest Foods since my post: Dawn Fresh limit 5 cans. People had come in droves to Harvest Foods following my post.

My city home accidentally became the epicenter of the universe in supply chain management for the unsuspecting manufacturer. People far and wide began to report in to me where they found the product and how many hours they drove to get it. This included the quantity they were able to purchase whether it be three cans or a whole case. Online gloating and black market sales began to ensue whensoever somebody hit the mother lode.

In hopes that I might be able to siphon a can or two off a friend in exchange for my gravy, I refrained from joining the panic that I had unintentionally created. With a son off at college, longing to know how to make his mama’s gravy, I figured it would be in my best interest to create a video of the glistening gold in my pot. Therefore, in ritualistic fashion, I compiled a little time lapse of the subtle process of gravy-making. Because pork is a major food group of my region I used pork steaks, but for my non-pork eating friends, the same food science can be applied to beef or chicken (as long as it’s bone-in).

Things have somewhat settled down in The Town Called Panic, though prices are higher than ever on this hidden treasure. While it seemed for a few weeks as though the world would truly end for lack of proper brown gravy (the only gravy), my friends at What You Got In Dat Pot and Dawn Fresh didn’t mind at all. Neither did all the hometown grocery stores in Louisiana that took the spillover of a Walmart ixnay on the product.

Besides the testament to the power of social media illustrated in this story, along with the voice of the “common housewife”, I present to you by popular demand How To Make Brown Gravy Using Dawn Fresh by Giorgio at www.brandichambless.com.