Update: Standoff ends between police and man who shot officers

A 10-hour standoff ended early Thursday morning in Flower Mound when the suspect who shot at and injured three officers finally surrendered to law enforcement.

A woman went to a neighbor’s house and called 911 around 7 p.m. Wednesday to report her husband, a 60-year-old man, was threatening suicide, according to the Flower Mound Police Department. Police arrived outside the man’s home in the 2900 block of Termaine Drive, near the Flower Mound Library, and tried to make contact with him, but he had barricaded himself alone in the house and did not come out.

Just after 8 p.m., the man fired a gun at police from inside the house and injured three FMPD officers, FMPD Chief Andy Kancel said in a news conference Thursday morning. Police officers returned fire but did not hit the suspect and retreated away from the house. 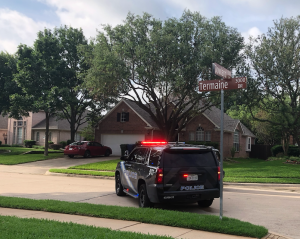 “We’re very blessed and we’re very thankful that the injuries to the officers were not more severe,” Kancel said. “We count our blessings for that.”

The standoff went deep into the night, as SWAT officers from FMPD and neighboring cities used drones and a robot to monitor the scene and deployed tear gas to get the man to leave the home. Around 2:30 a.m., the suspect fired several rounds through the front door at the robot. Police then evacuated all residents in nearby homes by armored vehicles to take them to a safe place.

Eventually, the local SWAT officers were relieved by an FBI SWAT team, which breached the home and deployed tear gas around 5:30 a.m. He finally left the residence and surrendered without incident. He was taken to a nearby hospital, because of the tear gas, and will be booked into jail. His identity and the charges he faces will be announced soon.

The Texas Rangers will be investigating the officer-involved shooting.

During the news conference, Sgt. Jason Rachal, a FMPD spokesman, said that the suspect didn’t speak to officers or negotiators much during the standoff.

“There was very little communication with our crisis negotiation team,” Rachal said. “He did exit the residence a few times throughout the night and yell some things at the officers on the perimeter, but as far as true engagement between the crisis negotiation team and the suspect, he didn’t really allow us that.”

Rachal said that police have been called to that residence before and guns had been surrendered from the home in 2017, then returned back to the homeowners in 2019.

Residents who were evacuated are being allowed to return to their homes on foot — except for two residences that are part of the crime scene — but the roads remain closed to vehicles Thursday.

Rachal estimated that a total of 30-35 Flower Mound officers responded to the standoff throughout the night, as well as about 30 other officers from the FBI and neighboring cities.