Monthly roundup of news from Lantana, TX as published in The Cross Timbers Gazette. 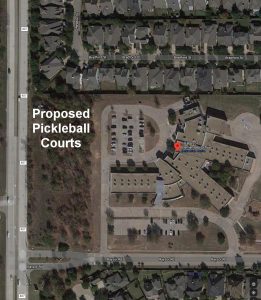 Pickleball is the fastest growing sport in America, according to the Sports and Fitness Industry Association. It features a smaller court and a lower net than tennis, with paddles a bit bigger than table tennis and a perforated plastic ball, similar to a Wiffle ball.

A few years ago, the Lantana Community Association restriped one of its five tennis courts to allow for three pickleball courts in response to a growing interest in the game by residents.

FWSD #6 board member Ross Ferguson saw a pickleball court complex in Houston and felt that more courts would be a “nice addition to the community.”

He is proposing building eight pickleball courts on a portion of 2.5 acres of undeveloped land FWSD #7 owns along FM 407 adjacent to E.P. Rayzor Elementary School and envisions partnering with the Lantana Community Association to oversee them.

“The HOA certainly expressed their excitement about the potential for this project and they did agree conceptually, if we were to build it, to operate and maintain the pickleball facility in much the same manner as they do the tennis courts,” Ferguson said at the April 20th FWSD #7 meeting.

The first step is for the districts to approve an engineering study at a cost of $12,700 to see if the courts could be built on the proposed site.

“I would like to see the boards move forward with approving the task order, then the engineering team can do their study and we can continue to evaluate the potential for this project,” said Ferguson.

Most of the FWSD board members agreed.

“I’m in favor of at least doing a study on it,” said FWSD #7 board member Todd Beggs. “I do think our residents would certainly appreciate it and I think we are really inadequate on what we have today with all the demands on our tennis courts.”

A couple of board members had reservations on funding the engineering study.

“Where I struggle with this is that there’s a percentage of the population that would want and use this but there is also a percentage that would love a dog park or skate park,” said FWSD #7 board president Randy Fogle.

“The thing that gives me pause is that we have this land here and we could do a lot of things with it,” said FWSD #6 board member Max Miller. “Everybody will have a different opinion on it and I venture to say that if I randomly asked residents what they would like to see there, I don’t know where pickleball would fall on that scale.”

Ferguson countered that an engineering study is the only way for the boards to know if the project could even happen.

“That’s why we need to do this study, to really put the reality into exactly how it would fit or wouldn’t fit… parking, easements… what it would cost and if it’s feasible or not,” said Ferguson.

“If we do the study it will give us some schematics and then I think maybe what we do is some sort of community outreach and input before we pull the trigger,” Gilbert said.

The motion to approve an engineering study passed unanimously in FWSD #6 and 4-1 in FWSD #7, with Lynne Thompson casting the dissenting vote.

The winter blast left its mark on Lantana’s landscape in a bad way, and the Fresh Water Supply District and Lantana Community Association are working with Gold Landscape on replacing dead shrubs at the entrances to the subdivisions and in common areas.

The now rust-colored shrubs (Indian hawthorns) that didn’t make it through the freeze will be replaced with drought-tolerant material that can withstand colder temperatures.

The Fresh Water Supply District boards in April approved $82,898 for the removal and replacement of dead shrubs. The HOA is expected to spend an estimated $96,000 to get things looking spiffy again. The transformation should be completed by June.

There was better news regarding the live oaks, which seem to be faring well for the most part.

“We are not recommending to replace any trees at this time as we feel like the majority of them are going to make it,” said Lantana General Manager Kevin Mercer.

This year’s Amazing Race was a huge success! Benefiting Refuge for Women, the Lantana Ladies League hosted this popular event for members and guests in the surrounding community. Refuge for Women is a local non-profit organization specializing in long-term care for women who have escaped human trafficking or sexual exploitation.

On April 20, the league hosted the event at the new Lantana Community Event Center with six teams participating for a total of 53 “racers” and 20 member and sponsor volunteers.

Each team chose a name, a color and competed for points in 11 challenges. The Hustlin’ Honeys (yellow team) beat out the competition to win the Amazing Race and bragging rights until next year.