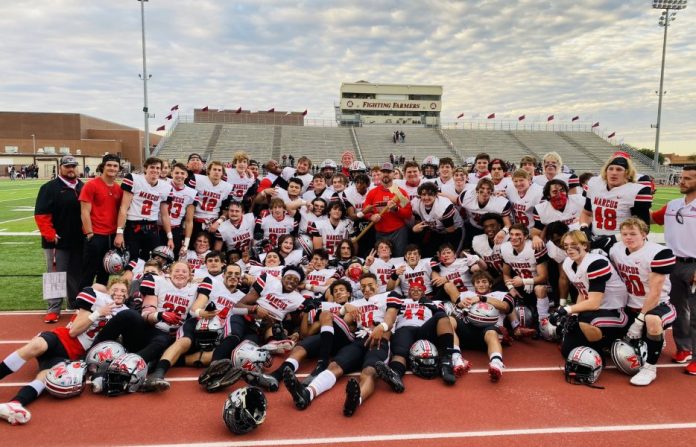 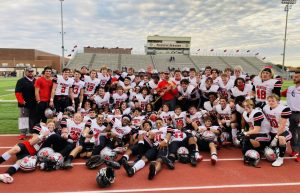 The Battle of the Axe was a barn burner on Friday afternoon, and not only will Marcus continue to have bragging rights, but it clinched a district title in the process.

Nussmeier hit Tyler Schott on a 21-yard pass, and J. Michael Sturdivant for a 4-yard touchdown pass in the second quarter and Marcus led 35-28 at the break.

Lewisville actually tied the game at 35 and took a 38-35 lead early in the third quarter, but then Marcus began to pull away.

The Marcus defense came up big late in the fourth quarter, as Zach Ohlemeier returned an interception 31 yards for a touchdown.

Marcus will host Plano West at 7 p.m. on Dec. 4 in its season finale.

270 yards & 4TD’s for @Garrettnuss13 in the win – I asked him about playing in the battle of the axe, what it means to be the first Marcus team to be back to back district champs and how he wants to be remember as a @MarcusFootball player. @GameOnSportsPro @friday_stars pic.twitter.com/4WDgZMijtQ

The Eagles jumped out to a 7-0 lead early in the first quarter on a 37-yard touchdown pass from CJ Rogers to Cash Walker.

Argyle drove 70 yards later in the first quarter and scored on a 29-yard pass from Rogers to Hayden Stewart.

La Vega scored early in the third quarter, but Argyle answered with a 19-yard touchdown run from Tito Byce.

The Pirates came back and added another touchdown, and the score was 21-14 heading into the fourth quarter.

Argyle extended its lead to 14 midway through the fourth quarter on a 3-yard run from Rogers.

The Eagles will play Melissa in the state quarterfinals at a time and location to be determined.

And Argyle comes up with a game-sealing INT! And some extra curricular activities at the end. It’s been chippy all game. @argylegridiron@argylesports@argyleISD@ArgylehighTX@argylebarstool#txhsfb #UILPlayoffs @paytpeterson1 @AFG_Sports pic.twitter.com/1uU0WdLVzx

The Jaguars trailed 8-0 early on, before Peyton Porter scored on a 4-yard run to make it 8-7 Plano at the end of one.

In the second quarter, Flower Mound (4-5, 2-4) drove 54 yards and Nick Evers connected with Isaac Carpenter to make it 14-8 Flower Mound.

Following a Wildcats punt, Flower Mound extended the lead to 21-8 on an Evers pass to Cade Edlein for 47 yards and after completing an 11-yard pass to Walker Mulkey, Flower Mound led 28-15 at the half.

The Jags opening drive of the third quarter went 82 yards and culminated in a 2-yard quarterback draw for a touchdown for Evers, and following a Plano punt, Evers broke a 40-yard run to make it 42-15 Flower Mound.

Plano scored its third touchdown on the ensuing drive, but Flower Mound came right back and scored on a 37-yard pass to Carpenter from Evers.

The Jaguars made it 56-22 on a 1-yard run from Evers, and scored its final points of the game on a 63-yard interception return from John Dulski.

Flower Mound will play Coppell in its season finale at 7 p.m. on Dec. 4 at Buddy Echols Stadium in Coppell.

The Wildcats struck first, scoring on an 8-yard run from Eli Stowers early in the first quarter.

Guyer made it 14-0 after driving 37-yards on its next possession following a fumble recovery and scored on an 18-yard run from Stowers.

Tiyon Alridge then scored on a 7-yard touchdown run for the Wildcats, but a missed PAT made it 20-0 Guyer, and it was 20-7 at the end of one.

Stowers scored again to start the second quarter on a 23-yard run, but Little Elm answered with a touchdown of its own.

Byron Phillips came right back with a 3-yard run, but Little Elm answered once again, and it was 34-21 Guyer.

After that, it was all Wildcats, as Phillips broke a 75-yard run, Stowers tossed a 37-yard touchdown pass to Alridge, Brailynn Pegues galloped 53 yards for a touchdown and Jackson Arnold scored on a 3-yard run.

To top things off, Michael Mayfield drilled a 56-yard field goal late in the fourth to make it 65-21 Guyer.

Guyer’s playoff run begins December 12 at 1 p.m. at the C.H. Collins Athletic Complex, as the Wildcats take on Coppell (6-3) in the bi-district round of the Class 6A Division II playoffs.

Fort Worth All Saints 44, Liberty Christian 17

The season came to an end for the Liberty Christian football team Saturday afternoon, falling to All Saints 44-17.

The Warriors defeated Central Catholic High School 27-14 last week in the area round of the playoffs to reach the regional round today.

Following an All Saints touchdown to start the third quarter, Daniel Greek hit Kelen Moran on a 37-yard touchdown pass to make it 31-10.

The Saints extended the lead to 44-10 when Greek and Moran hooked up again, this time on a 61-yard touchdown pass to make it 44-17.