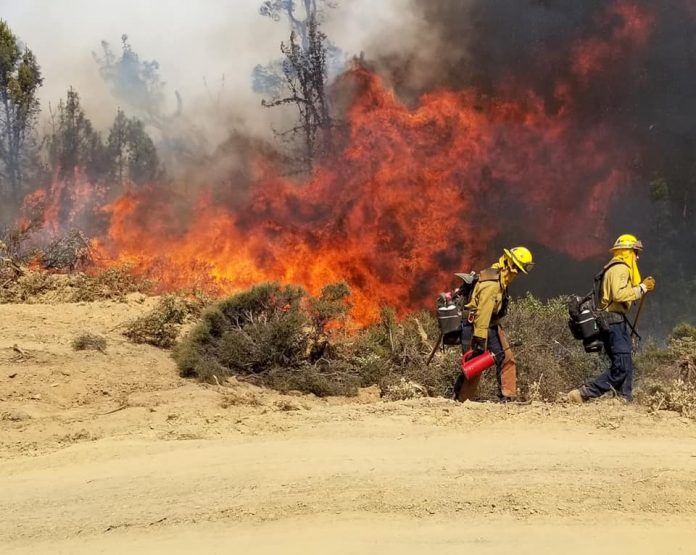 Two groups of Flower Mound firefighters recently returned from spending weeks assisting with the response to the largest wildfire in California’s history.

In the summer, the state of California requested wildfire aid from other states, including from the Texas Intrastate Fire Mutual Aid System, a state program that utilizes local firefighters from around the state to provide aid when a fire is too much for the local authorities. The state reimburses the town for the deployed firefighters’ overtime, as well as overtime required to cover their shifts.

As part of the TIFMAS aid, three Flower Mound Fire Department personnel and a FMFD brush truck deployed to California on Sept. 11 without knowing exactly which fire they were going to.

“On the way there, we got the assignment to go to the August Complex Fire in northern California,” said Capt. Wade Woody. “We were trying to learn all we could on the way and found it was already the biggest fire in California history and was still growing with very little containment. We were learning about the terrain and mountains and fuel that’s burning, which is totally different than what we have in Texas.”

When they arrived at base camp near the town of Ukiah, a few hours north of San Fransisco, a brownish-orange haze was cast over the area by the fire.

“You could tell we were in the mountains, but you couldn’t see anything,” Woody said.

On their first day, the FMFD firefighters were expecting to see some of the big fire but at their assigned location in the mountainous terrain, there was actually very little fire and were told to mop up and improve the containment line with other crews from around the country. It wasn’t the work they were expecting, but they were motivated to do a good job, Woody said.

“After the first couple days, we saw we were really making a difference,” Woody said. “Uncontrollable lines became cold, and they were no longer worried about the fire getting past that point.” 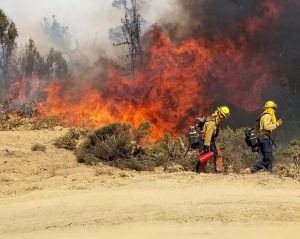 The work wasn’t the same every day, but changed often depending on the location and current conditions.

“We used every tactic in the book,” Woody said. “There were some burnout operations, where we burned out all the fuel to stabilize that area, and other days we were using water from tanks. Other days we were coordinating water drops from helicopters, and there was a whole lot of dry mopping with hand tools.”

Over the two-week deployment, the FMFD crew, along with the other crews, worked 24 hours on, 24 hours off, not including travel time, and sometimes the assignments were three hours away from camp. That grueling schedule was mad easier by how well organized Cal Fire was, Woody said.

“The base camps were like mini cities, they had everything you’d need to continue working for extended periods,” he said. “You drop off your laundry in the morning, and it was clean same day. Emergency vehicle techs were there to fix your rig and all the fuel and food you’d need was there.

“Cal Fire has been managing large incidents for decades … They’ve perfected the system.”

Woody’s crew was replaced by a new three-man FMFD crew in late September. That crew returned home last week, and on their way home, they helped douse a vehicle and grass fire in New Mexico.

The August Complex fire, as of Wednesday, is 91% contained and has covered more than 1 million acres. One person died as a result of the fire and 210 structures were destroyed, according to the California Daily Wildfire Update.