A trap east of Lewisville also tested positive, and DCPH will conduct truck-based ground spraying in the areas near the positive WNV mosquito traps beginning Wednesday night, according to a DCPH news release. Weather permitting, the ground spraying will be conducted each night Wednesday through Friday between 9 p.m. and 5 a.m. 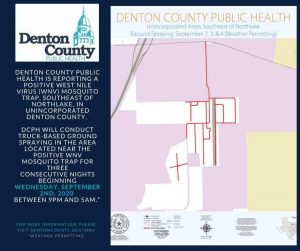 “Today we report two additional positive mosquito traps in unincorporated Denton County,” stated Juan Rodriguez, Assistant Director and Chief Epidemiologist at DCPH. “Ground spraying in these unincorporated areas is weather dependent, but we are hopeful it can be completed as the rain ceases.”

A detailed map of the spray area is located on the DCPH West Nile Virus website at DentonCounty.gov/WNV, along with additional information including mosquito maps, latest news, and facts about WNV. Residents in the affected area are being informed via emergency alerts and signage.