Martin Rodriguez is just as eager as everyone else is to see what the new and improved Kids Kastle will look like when it’s finally finished this fall. But he wasn’t going to wait until the grand opening to give the playground its first real love story.

Rodriguez, a longtime Flower Mound resident who grew up happily getting lost in the walls of the original Kids Kastle, proposed to his girlfriend, Danielle Ruemenapp, on June 12 under the same tree where they had their first picnic date eight years ago. Everything went off without a hitch, and Danielle said yes. What’s neat about this marriage proposal, though, is that Rodriguez first had to get permission from the City of Highland Village.

After all, Kids Kastle and everything around it is a construction site and closed to the public for several more months.

“When I called, I told them what I wanted to do and asked if I could have access to the park. But they apologized and said it simply wasn’t safe,” Rodriguez said. The long-awaited community-build project was supposed to have been finished in April but got delayed by the COVID-19 pandemic. “They were sympathetic, but they told me no.”

He added, “I remember calling back that same day, asking, ‘Are you sure we can’t make this happen?’”

Rodriguez was respectfully told no again. But what happened next is a shining example of why Kids Kastle was built in the first place: to showcase the area’s unwavering community spirit and forge memories that last a lifetime. Located at 2200 Briarhill Blvd. in Unity Park, the original Kids Kastle playground was designed and built in 1994 with the help of residents.

Kids like Rodriguez and Ruemenapp played on it all the time, and it wasn’t your ordinary playground. It had everything a kid could want, and it was a destination — not just in the minds of those who lived in the area but also for anyone across Dallas-Fort Worth. When it was partially destroyed by fire in 1999, residents raised funds and rebuilt it.

“I remember sliding down those slides. It was a lot of fun memories,” said Rodriguez, now 23.

Like anything else, Kids Kastle reached the end of its useful lifecycle and was in serious need of TLC. Voters approved a complete rebuild in the November 2017 bond election, once again calling for a true community-build format. City officials would still take the reins, but instead of doing the entire project themselves, they’d enlist help from residents, nearby businesses, churches, schools, and other volunteers who would provide input on the design and roll up their sleeves for some good old-fashioned manual labor.

The playground build portion of the project is scheduled for completion in two phases, with Phase 1 complete and the Phase 2 community-build portion scheduled for 2021. And this time, they want to take Kids Kastle to another level.

“We visited all the elementary schools and had a city design day,” said Phil Lozano, the city’s Parks and Recreation director. “We needed the new Kids Kastle to provide inclusive features and easy access to people with limited mobility, and we’re getting that. But we also took into account what everyone wanted. The kids wanted a zip line — that was No. 1 on everyone’s list. They wanted better swings, so we got them that, too, along with various climbing elements and other special features. I researched this for a year. My team and I looked at similar sites in Denton, Flower Mound, Anna, Rowlett, and Cedar Hill. We went to all of those places to learn what challenges they had, what worked for them, and if there was anything we could do better with our Kids Kastle. We did a great job. The only thing we didn’t plan for was a pandemic.”

That’s where the foundation of Rodriguez’s plan began showing cracks. Had the coronavirus not hit and shut everything down, Lozano estimated that the entire project would have been completed by the end of May, and Rodriguez would have had a brand-new playground at his disposal when he decided to pop the question.

Instead, he was told he’d have to wait or come up with another idea.

“I figured it was back to the old drawing board,” Rodriguez said. “I stayed up all night with a roommate brainstorming.”

But then something funny happened. Lozano and his staff were in a meeting a day or so later when his assistant mentioned in passing that a young man had called to ask if he could use the park to propose to his girlfriend.

“When I heard about how they had their first date there and grew up playing on that playground, I knew we had to find a way to make it happen,” Lozano said. “The coronavirus has hurt so many folks already, both physically and emotionally. It also delayed this project. There was no way we were going to let it get in the way again. COVID or no COVID, we were going to figure out a way while still being safe and fully complying with CDC guidelines.” 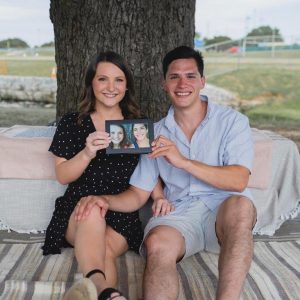 The next day, Rodriguez got a call from the city saying that they were willing to help. Lozano and Rodriguez then used FaceTime to do a quick virtual walk-through of the site so that Lozano could show Rodriguez what was going on and get a better understanding of exactly where the proposal was going to happen and what Rodriguez needed to make it work.

All Rodriguez really needed was that one special tree. And it was still there.

“He said, ‘It’s that tree right there,’” Lozano said while recounting their FaceTime call.

Rodriguez and five of his closest friends met Lozano at the park and constructed a beautiful picnic scene under the tree. The setup was straight out of a romantic movie, complete with an area rug for them to sit on under a canopy. Rodriguez also had a picture collage with photos of him and Danielle along with flowers, pillows, a table, and other essentials.

He also had a photographer there to capture a few sneaky pictures from a safe distance as he got down on one knee.

“I’d like to think I did a good job of keeping all of it a secret. But once she got there a little while later, she had a pretty good idea of what was about to happen,” Rodriguez said. “I’m not good at keeping secrets, and if you knew Danielle, you’d know she doesn’t like surprises. When Phil told me he would help me, Danielle was the first person I wanted to tell. But I couldn’t. I did, however, make a lot of notes in my phone so that I could fill her in on how it all came to pass.”

Naturally, Danielle said her King of the Kastle thought of every detail.

“Three of my best girlfriends were working really hard with him to make sure it all worked out perfectly,” she said. “I didn’t catch on to anything at first. In fact, he had told me the night before that he was going over to my grandparents’ house to ask them for permission to marry me. So here I am thinking the proposal is still a few months away, and that I’m just going out to dinner with my girlfriends. But then my girlfriends drove me into the parking lot at Kids Kastle, and I saw Martin standing at the front of the construction entrance. Everyone was giggling, so at that point, I knew.”

She added, “I was blown away. The park is this huge construction zone, and the fact he was able to get in touch with the entire parks and rec team to even get authorization to be there was incredible. It was the grandest and sweetest gesture.”

The City of Highland Village has received countless testimonials over the years about Kids Kastle and how special a place it has been in the lives of so many residents. But Martin and Danielle’s story is the first Kids Kastle story that has been documented— a perfect backdrop for what everyone envisions for the playground moving forward.

“It’s a great story. They came here as kids, and now they’re starting the next chapter of their lives together. If they are blessed enough, someday, they’ll be bringing their children here, too,” Lozano said. “Unity Park and the City of Highland Village had a chance to do something exceptional amid the pandemic, and this goes to show that love overcomes all.”

“Luckily, Phil is a romantic guy, too,” Rodriguez said with a laugh. “This will always be a special memory for us.”