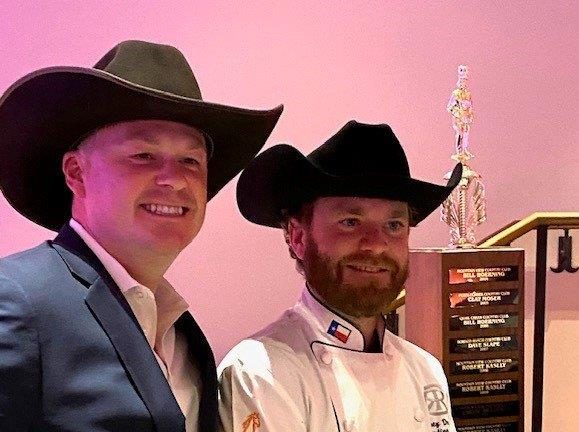 There are a lot of reasons to celebrate the operations staff at Robson Ranch as we move into a new decade. We start 2020 with a new General Manager, Rhett Hubbard.

After seven years guiding our community, Kent Coleman has decided to move on and enjoy retirement with his family in Louisiana. For the remainder of the year Kent will serve as a special financial advisor to Robson Ranch while he and his wife pack up their possessions to downsize for the move – a task all too many of us know to be daunting at best.

Rhett is not new to Robson Ranch. He began his career here about 13 years ago, most recently heading up food and beverage operations before moving on to train as our assistant general manager.

Perhaps you can start to see a trend here. Robson Ranch in Denton is like a family operation with lots of longevity and promotions from within. This family spirit and congeniality is felt in all aspects of Robson Ranch Operations. Outside guests are always welcome on our property to experience this comradery firsthand on our 27-hole public golf course and Wildhorse Bar and Grill (also open to the public.)

It is very fitting that Rhett worked with our existing Food And Beverage Director Jeremy Trietsch (a 13-year veteran at Robson), Executive Chef Aubrey Daniels (a six-year veteran) and their food and beverage team to WIN bragging rights for the best meal served at the 17th Annual Chef’s Gala held at Robson’s sister community, Pebble Creek in Phoenix, Arizona. Robson Ranch Denton won top honors over four other Robson communities by serving the most delicious meal and wine pairing.

What did the traffic light say to the driver? “Don’t look, I’m changing!”

Ok, I can hear your groans from here. But at least now I have your attention.

I hear a lot from my friends and neighbors about the effect of growth in our area. There’s one thing in particular that seems to be on all our minds. It’s the number one thing I hear about when people oppose new development in their neighborhoods. And it happens to be the number one thing people want to see their tax money spent to fix. You already know what I’m going to say—TRAFFIC.

Compared to the big city, Denton doesn’t really have a traffic problem. However, we certainly have places in town where the roads and infrastructure have not caught up to the number of cars we’re pushing through. Even with the recent improvements, most sane people try to avoid the intersection of I-35E and Loop 288. Backups at the intersection of I-35 and University Drive have reached epic proportions.

So what is your City doing about it? First, let’s recognize that both the examples I just gave are state-owned thoroughfares managed by the Texas Department of Transportation (TxDOT). In fact most of the roads we love to hate are TxDOT’s responsibility. But your City engineers and planners work daily with TxDOT to keep things moving. In addition, we plan, construct, and maintain our City-owned streets to be efficient connections to TxDOT roads and viable alternatives when traffic gets bad. When a road backs up or falls into disrepair, drivers change their routes to avoid it. Not addressing one problem area—ours or TxDOT’s—starts a ripple effect throughout the system.

We are also constantly working on improvements to our City-owned streets. In 2019, we completely rebuilt 10.8 lane-miles of failing roads. Over the last six years, we’ve constructed more than 89 lane-miles of new roads. In November the voters approved issuing $154 million dollars in bonds for streets improvements—many in neighborhoods that have been overlooked for years.

Right now we are finalizing the 2020 Denton Mobility Plan. This plan—built from data, experience, and public input—will chart the course of transportation in our city for years to come. It is a comprehensive outlook of how people move through our city, where new roads are needed, and which existing roads need expansion or repair.

In this plan, we also look beyond cars and commuters. More of our neighbors are choosing to walk or bike to work or school. There are also those who don’t own cars, and have no choice but to walk or bike. So it’s only fair that we build a system that is just as safe and efficient for pedestrians and cyclists as it is for the folks in cars. For example, one of my main goals is providing safe sidewalks around all of our schools and major public buildings.

For more information on the 2020 Denton Mobility Plan, or to weigh in, please visit this website: www.cityofdenton.com/en-us/mobilityplan.

Please don’t hesitate to contact me on these issues and any others before the Denton City Council. You can reach me on my cell at (940) 208-7439, or by email at [email protected]. I look forward to hearing from you, and I’ll see you around town!