The Soapbox: The ‘Treasures’ of the Gift

There is nothing on this earth more to be prized than true friendship.

Several years ago, a friend had some property that held years’ worth of treasures in an old shed prior to the purge of putting the property on the market. Now, I use this term “treasure” very loosely for as they say “what is one man’s treasure is another man’s trash” – or something like that.

My friend was quite the junk collector himself and had an affinity for items such as monkey statues, old lanterns and other “valuables” that might eventually be of use.

So, it was a laugh when this array of treasure was presented to me as well as the offer of first dibs. I plainly recall the item that was a most resounding NO – Beethoven’s Bust.

Yes, there he sat—Beethoven on a shelf of a dusty shed as if he was in search of rescue from this less-than-adequate environment.

My snub of this incredible offer resulted, undoubtedly, in the joke being on me when just a few short days later I opened up a text to see a photo of my son clutching Beethoven with a grin bigger than the Cheshire cat.

Beethoven was coming home to Mama.

There he sat, first in my son’s room, then to my office, and eventually the place of honor when he was the centerpiece of a symphony afterglow I held following the performance of Beethoven’s 5th. Socialites guzzled wine and popped one tuna tartare bite after another whilst the joke was now on them. Beethoven was home.

He is back in my office now where he and I have been scheming about his next gig this fall. It’s gonna be big! I generally have to report in to my hoarder friend as to how Beethoven is doing and this has always inspired a good belly laugh and a lifetime camaraderie.

Reminiscent of my writer colleague Cindy Stroup’s “Klackerman” column in which her family played jokes with the whereabouts of one tiny statue for years, I began to think about the power of recycling the magic of old trinkets between friends.

Another friend of mine had a literal red bull, a little figurine that had been re-gifted between two friends for years and later brought joy through tears when it happened to be the only surviving artifact of a house fire. 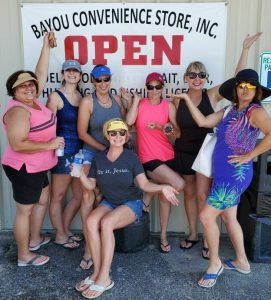 At a recent girls’ night out, one friend told the story of a gift bag that she and a friend had re-exchanged each Christmas, so much so that the gift inside was superfluous since the sentiment had become more about the years of friendship represented by the bag. Yet another said the same of an old birthday card that she and a friend had passed back and forth for years, simply adding a date to it with the new year and a few new words until it was the others’ turn to celebrate!

All of these old items, Beethoven, the Klackerman, the red bull, an old gift bag, and a recycled birthday card reminded me that there is so much truth behind the notion that it is not the gift that counts, yet the sentiments behind the gift, friendship itself. A heart cannot be bought and neither can a relationship be manufactured. It takes years of cultivating the fertile ground of listening, telling, being, doing, and reliving life’s memories together.

On a recent girls’ trip to the coast, my lifelong friends rented an old house and packed rubber boots, buckets, strings, old chicken necks for crabbing, and more ice chests than I care to count. We survived a blow out by flagging down two fellas who were changing the WRONG tire before we noticed and had our schoolteacher friend read the truck manual to them of how to do it.

As expected, we also survived the trumped up pranks since the last excursion when the laugh was on me as the girls’ had placed a lizard in my hair and I walked around with it for quite a while. Two weeks later, I found him in my purse as he had been to work with me, met with my clients’, signed contracts, and helped me buy groceries. This time, it was an old fish head I lovingly placed back in the suitcase of the ringleader only to be found once she arrived at home. As I said, it takes years to develop THIS kind of friendship.

So it was, that at the end of the girls’ trip I preemptively redeemed myself by leaving a little gift box with a glass ornament inside on each “sister’s” pillow. Girls’ Trip 2019 I wrote on the bottom of each one and then we parted ways until next year. Back at home, I checked my purse for lizards then found my usual grind at the office. When I peered over my cup of coffee there was Beethoven staring right back at me. He and I have come a long way together and boy is our plan for the fall a doozy, but until then it will have to be our little secret.